When the Way to the Exit is through the Dust

What It's All About
(continued)
So, about this Exodus angel who bears the name of God and whose voice we are told to obey. God sends Him, saying, "Behold, I send an Angel before you to keep you in the way and to bring you into the place which I have prepared," says the Lord. He continues, "Beware of Him and obey His voice; do not provoke Him, for He will not pardon your transgressions; for My name is in Him. But if you indeed obey His voice and do all that I speak, then I will be an enemy to your enemies and an adversary to your adversaries. For My Angel will go before you and bring you in to the Amorites and the Hittites and the Perizzites and the Canaanites and the Hivites and the Jebusites, and I will cut them off" (Exodus 23:20,23).
The only way to the exit is through the dust.
He leads into battle zones where the enemies wait. He ambushes them.
He leads further where the Dragon waits. He's ambushed him, though for now it seems the Dragon still breathes hell-fire until, in the heat of daily battles and in the confusion, God Himself may begin to look untrustworthy.
But is this really surprising?
Doesn't the Dragon hope to confuse trust?
Isn't that what the snake in Eden did? Didn't he cast doubt on the words worthy of trust which God spoke to Adam and Eve? He did, and nothing's changed.
Still, a sidewinder? In Eden? It doesn't fit.
Or does it?
Maybe what fits has little to do with what I think goes together, but everything to do with what God Himself puts together. And maybe the most trustworthy defense against battlefield confusion is the truth of God's name. 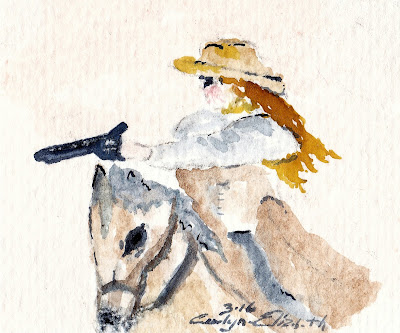 Into Battle
“Why was there a sidewinder with a big mouth in Eden, of all places?” I open my own mouth big, and the question comes out from an empty hole gaping inside my tent.
“Why don’t I know You better?" I wonder.
For the moment, I forget about the garden and the sidewinder. I rewind just five days prior, when God divided light from darkness. He who is Light and in whom there is no darkness kept a portion of darkness, I think to myself.
"Why?" I just don’t understand Him as I thought I did; and oddly I have the battles to thank for this realization.
My canvas is being blown about and shaken. I stutter, “Why? I don’t understand! Who are You anyway?”
I don’t understand why He kept some of the darkness on the first day and then, five days later, made the creeping serpent. He doesn't like darkness, and He doesn't like the name of the serpent.
I don't understand why He placed the serpent in Eden on the same day that He created Adam and Eve. “On the same day? Really, God?”
Can I speak to Him like this? I do because I must know who He is, truly, not who I’ve heard others say He is and not who I want Him to be.
I have to know the truth to know what is trustworthy.
I have to know what to believe so that my faith is based in reality.
I have to know what He’s capable of doing in my life because of what He did the first day and the fifth day of creation and unflinchingly said, “It is good.”
I have to know, so that my hope is founded on what He says is good, not on what I think is good.
I must know Him true and real; and how to follow His Angel into battle and then exit agreeing with Him, “Yes, it is good!"
The serpent hissed. Eve bit. Adam bit. I wish the serpent was the one who bit because if he bit Eve and bit Adam, then surely they would have seen him for who he is.
But God wanted them to see who He is; and He wants the same thing for me. It's redeeming.
The bite was taken out of life itself, but God redeems.
When I bear the unbearable and suffer long, will I sacrifice the breath to say, "It is good?" Will I say it rightly? Will I make the sacrifice and not act as martyr? 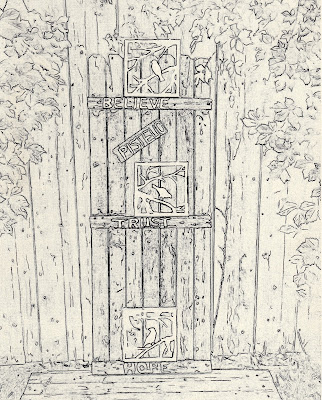 I think about the Exodus Angel.
I think about the battles I'm lead into which can only be won by the Angel of whom God says, "My name is in Him."
The battles must be won. They will be won, and they have been won. This is the way faith and hope talk.
To me, this is what it's about, the urgency for faith and hope. The urgent must find truth to trust, faith to believe, hope to keep no matter what. It’s about finding the exit into God’s heart when the tent door is slapped off. It’s all about where I’ve been led and am led.
There is a word for this: pisteuo. It’s Greek for believe, trust, and never lose hope in the God of salvation or in Christ.
Pisteuo is a verb, a “doing” word.
I’m learning to pisteuo, and I'm being changed in the practice.
Battles change a person. You either die or live. You either stop believing what you believed before the battles, or you believe it deeper. You either stop hoping what you hoped for before the battles, or you hope bigger.
I am being changed by the battles.
I find exit when the canvas door flaps. The flap sets my heart into unsteady rhythm because I remember what was and what wound in sideways. I step out of myself-exit-and share my soul’s skin and heart with the holy.
I share my soul with the holy, and say, “God, make it a happy place for You to live.” I’m talking about this tent. "I will do my part to make me a happy place for You.”
"I am in you," He says. I hear Him say it and His words change me from the inside out. I am deep in love in God’s heart.
“I love You so much, God!” I say from the heart, all surprise and bunny trail in backyards and maybe a tad off topic but not really, because if there is one topic I want constant in my life, it’s “I love You so much, God” in every moment. It’s my life’s topic. And pisteuo is my life’s word. True love rejoices in truth.
And that’s pisteuo.
And that’s love too. 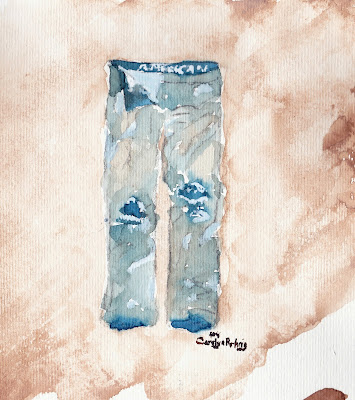 Blue Jeans
It’s mostly all just ordinary one-day-at-a-time life which takes extraordinary faith to live.
What is faith if not opening our eyes to evidence all around in things so normal that we don’t see them anymore? I live the “God, open my eyes to see things not seen” prayer.
I must.
What business do I have hoping for what I can’t see if I don’t live now to see what I can?
So I live the prayer in the kitchen at the sink where a squirt of dish detergent under hot running water turns into a swirling rainbow film that holds air in bubbles. I see air and scoop it up and hold it there. I hold air. And I have business hoping for what I can’t see because of this.
I live the prayer in the laundry room with crimson stains on jeans with scraped knees from rough play on blacktop and earth. The stains are lifted away, and Jesus tells me His blood has lifted the stain of sin away from my soul that runs crimson and has played rough on this earth too.
I live it with string mop in hand as the morning sun stretches across the wood floor, revealing dust and dog hair floating in the air. I catch it all up, and everything that went down yesterday is wiped away in sunlight.
And I live it in my German’s big arms at night when a low whisper stills blow and torn canvas is mended and we believe and trust and hope. Life is born this way months before it’s seen.
I pursue it, this life that is, before it’s seen. And I hope that is because of what is seen.


All this is what it’s all about for me.