An engagement announcement, "She said yeeeessss!!" And her joyous laughter is caught on video, "I can hardly wait to be your wife!"

A daughter-in-law quietly smiles to herself in the passenger seat, and my son asks what the smile is for. "I'm just thinking about my WIFE shirt," she giggles. She's wearing it today, even though she might have decided on something red, white, and blue. Later I'd see the  Facebook message, "I love being this man's wife. And I also love in-laws who let us nap on their couches and take selfies on their trampoline #teamroehrig


And large patches of sky heavy with storm. 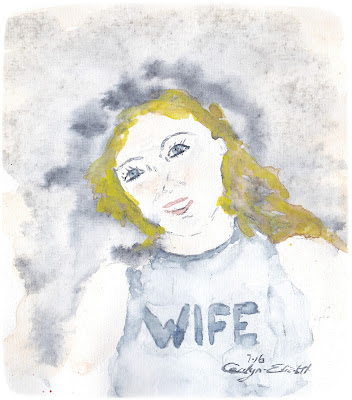 Wife
We drove home, my big German hub and me, and I pointed out the pretty fireworks filling sky in the west, "Ooh, that was pretty!" Then He'd point out the fire shooting down to ground in the east, "Hmm, look at the that!"

Something more than patriotism draws more than ooh' s and aah's from me this year. "You've declared my independence!" If I could look into His eyes this moment, I'm certain I'd see fireworks in them.

"You've declared my independence!" His eyes flash like a flame of fire, catch the colors surrounding His throne, and dance wild over the sea of glass till "aah" becomes a full "Alleluia! Amen! Alleluia!"

I've read about this in Revelation 19. "Alleluia! Salvation and glory and honor and power to the Lord our God!"

Are there fireworks in heaven? If so, then here's what they sound like-"I heard, as it were, the voice of a great multitude, as the sound of many waters and as the sound of mighty thunderings, saying, 'Alleluia! For the Lord God Omnipotent reigns!'"

My worship is this, "Alleluia! You've declared my independence!"

painting of fireworks and lightening

"The death that I died," He responds, "I died to sin once for all; but the life that I live, I live to God."

FREEDOM from sin and death and the demands of the flesh because "our old man was crucified with Christ Jesus, that the body of sin might be done away with, that we should no longer be slaves of sin. For he who has died has been freed from sin" (Romans 6:6-7).

FREEDOM from waywardness and lies because Jesus declares it, "I am the way, the truth, and the life" (John 14:6).

FREEDOM from darkness because He is the light.

What to say? Oh, there's an entire freedom conversation to be had. It's written in Romans 6, and He's already said to me, "Likewise, reckon yourself to be dead indeed to sin, but alive to God in Me."

"Aah!" I respond. "Therefore I won't let reign in my mortal body, that I should obey it in its lusts."

Someone ignite a freedom flare!

Lightening splits darkness wide. I see it right over there in the east, and everything in me wants to be what He declares I am-to live alive as He declares I am. "Sin shall not have dominion over me!"

We sang the Star-Spangled Banner in the car. "O, say does that star-spangled banner yet wave, o'er the land of the free and the home of the brave!" 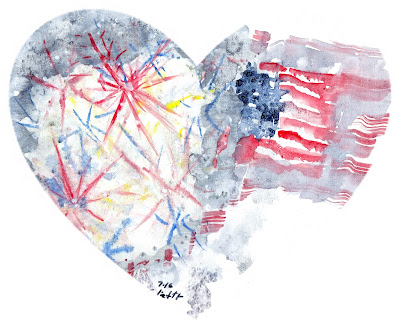 Fireworks and Flag
A young couple waged spiritual battle all through the night. A blanket thick, dark appeared above their bed. A dark presence intruded. They fought the spiritual war with spiritual warfare. They knew how.

They played worship music in the midnight hours and sent songs praising the beauty of God's holiness to the front lines while they found their voices.

They read God's word aloud-hours through several books and 52 Psalms-till the sky lightened.

They heard their prayers miraculously echoed in the lyrics which played non-stop through the dark, so that prayer and song mingled wild a spiritual "Ooh Rah!" as their courage mounted.

They called mid-morning, "Can we come over?" They napped in the living room, just a couple hours, a woke as refreshed as if they'd had a full night of sleep.

Then they shared the war story with us.

Maybe it began in heaven, the spiritual war, when Lucifer rebelled; and it's going to end in heaven when the declaration of independence is opened and read by the One who is worthy to open the scroll and loose its seals-the Lamb who was slain to give freedom from sin and death.

Till then, God tells us what the fare is for the spiritual war.

It's not flesh and blood weapons, for we don't wrestle against flesh and blood, not even our own. No, because there is no war against what's reckoned already dead. Forget about keeping a dead man down.

We wrestle "against principalities, against powers, against the rulers of the darkness of this age, against spiritual hosts of wickedness in the heavenly places" (Ephesians 6:12).

We rarely see it, but once  in a while God lets us see it a little bit, but only when He has reason.

Once in a while He allows us to know that we're flat dead without Him; then He says something like this-


"Remember the fare for this war;
Remember the belt, the shield, the sword;
Remember My light that shines out of dark."
"I remember," erratically beats from my heart.

Somehow in terror, I stand in peace;
Shaking voice and knocking knees;
Somehow I pray and wield the Sword
"gainst darkest cloud and evilest lord.