Fill the Dust Pan with Glory

Sweeping. And I'll admit to what's in the dust bin. A lot of dog hair, cat hair and dirt of earth collected on the bottoms of summer flip-flops and barefeet. There's dust, of course, which is, what? Salmagundi of everything earth, that's what. It's whatever blows in through doors and windows. And my home is surrounded with pecan trees, vines and roses for the most part. A lot of pollen on my floor, I'm thinking. And make up powder, because we are three girls and I can't think of anything miniscule enough to earn the name, "dust," that my large German leaves behind. I guess dust is too dainty for him.  And yes, I admit, there's a dead June Bug in the bin. Oh, and crumbs.

I pull dust out of broom bristles and let that float down into bin and remember what I read this morning. Maybe because I spent morning prayer just halted as Holy Spirit swept Holy Word into the likes of me and I sat back on my heels, gripped my coffee cup in both hands and pressed my forhead against bedside just collecting it. Collecting John chapter fourteen verse ten into the same bin with John chapter fifteen verse seven, "The words that I speak to you I do not speak on My authority, but the Father who dwells in Me does the works," and, "If you abide in Me, and My words abide in you, you will ask what you desire, and it shall be done fo you. By this My Father is glorified."

Honestly, I don't really know what it means to glorify the Father. It's one of those things that seems undefinable, but it's known when it's seen. It's kind of like the, "I'll know it when I see it" response I give someone when I'm not really able to explain what I'm looking for, but I'll recognise it. And  I do. Now. More than before. Because in the sweeping I recognized something glorious. Obvious, too. I've know of it, but not known it like now. It's just that Jesus' greatest joy has always been to glorify His Father.

Yeah, I know. Obvious. Basic. But powerful holy. It set me back on my heels and, "I've never seen it like this before!" I press it out.

"The the oil of joy for mourning," is His response and it's not off topic at all. It's what He's doing in this season and this morning it swept over me just "Ah-ha" exhale.

"Your greatest joy is to glorify Your Father." It's amazement fresh and it's also cross beam intersection where Christ mourning was intersected by the joy that was set before Him when He hung from nails and the joy of the Lord was His strength as He became dust bin for sin.

Glorifying God can't escape the need for God strength. And glorifying God can't escape the need for His joy, either. It sounds like cross talk, and it is, literally. Talk spoken from cross bearers. Psalm speech, "The joy of the Lord is my strength," and "[I] shall have joy in You strength, O Lord" (Psalms 28:7 and 21:1). When else do we most need God strength to be our joy, and God joy to be our strength except when taking up cross and feeling it. It's where joy and strength must intersect. And mercifully, it's unavoidable. The intersection. It's cross beams. And yeah, painful. Because the need for God-sized joy comes when I'm just so joy-needy that nothing less is enough. And it's the same for strength. God-sized strength when mine is whipped and the need demands only all that God has to give.

"Your strength and Your joy are my joy and my strength." I'm putting it together. And it goes in that order. His strength for my joy; His joy for my strength." I'm getting it slow, but it has to go that way, like that, because it's how the cross beams intersect. It's how I see it, anyway, and I let it settle.

"I swept the floors of every heart in the world; swept world floor too, and swept it all into My soul." He says it like that to me, because He knows I'm sweeping today. 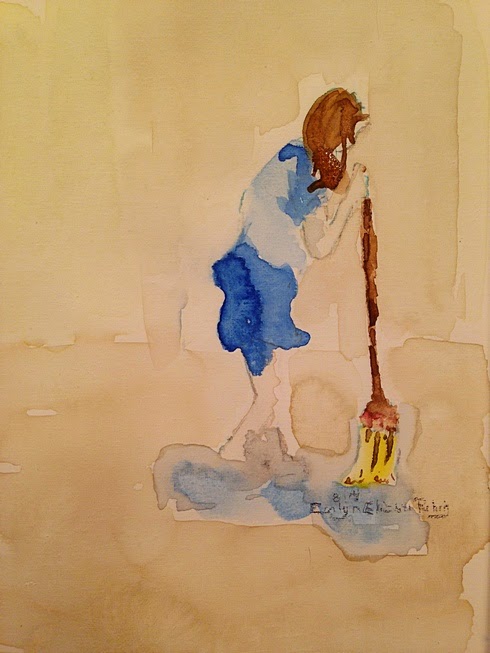 I stay here awhile. The thought is too much. I have known it. Recited it in the creeds. But have not let it become known to my heart, really. Not like now.

"Your sinless soul became dust bin for sin." Holy is sweeping the holy and I'm collecting it. "And then there was no choice for You. No option." I pause. Do I dare speak it? Dare verbalize what I'm thinking? I do. "Hell. Hell for the Son of God because He was also the Son of Man. And there's enough sin to keep feeding flames of hell forever." I can't say it in the first person to Him. I just can't. It hurts too much to say it to Him. So I say it of Him, in His hearing. It seems so backward wrong that I haven't let this settle quite so unsettling before. Haven't collected it up like this because I don't like to finger what's in the dust bin. Don't like to look at it. Just like the benefits of it having been done.

It's finished. And I'm looking at the dust bin in my hand before tossing it in trash under sink. "I have asked life from You, and You gave it."

I lean on broom. "Give us Barabas!" They shouted request and they only thought they knew what they were doing. But they didn't know. They didn't know that in the request was also the confession, "We are worthy of the release of Barabas, not Jesus."  I wonder how many said it true, later. Said it just confession and then plea, "Surely You are the Son of God. We asked for Your death and You gave us Your life."

My dust pile is growing slowly. Between thoughts. I made the same confession, and plea. I've said it, "I am not worthy of life, but death." It was girlhood confession of one who knew she was, but didn't want to be. I turns daring plea. Just turns dare to ask for grace, plea, "Give me Your life, that I may live." I dared for priceless grace. He gave.

He granted the request, and when all the world's sin filled Him till He became sin; He gave his life. Gave it.

How could it be glorious what came next? It could, and was, and is, only because it was, is, and always will be Son of God will to do the will of His Father.

"It was Son of God will." That's all I can think as answer to this overwhelming, "What does it mean to glorify the Father?"  Jesus says it. Just says it, "The words that I speak to you I do not speak on My authority but the Father who dwells in Me does the work" (John 14:10).  Said it to His disciples because it was His will to have the Father's works done. And because He never denied who He was. Redeemer. The Life and the resurrection. And so, it was His glory to complete what He came to do whether it was at the frenzied screams of goats, "Crucify Him!" led not by shepherd but by Pharisee hirlings, or whether it was at soft weeping "baa-a" of His own sheep, it didn't matter. "Give us Your life" meant what it meant to Him. And He opened His soul as nails opened His flesh. 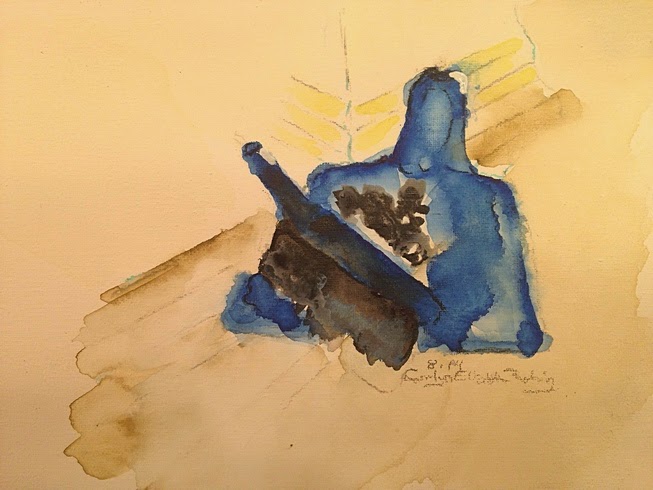 "Did You," I turn to Him because now there are some tears in the dust bin, "Did You cry inwardly, 'Oh, My beloved children, My little lambs, I hear the confession beneath the frenzied request. I hear the ache beneath the confusion. The longing beneath the fear. I hear the painful, 'I don't know how to live anymore! I've lost my place!', beneath the bravado? You must have, because You labored for life."

And He answers strange. He does. "The grave was merely womb."

I get it. "Your soul received sins as Your flesh received filthy nails, hammered onto filthy wood, and both conduct deadly spores." I think about this, and fleetingly wonder how many spores are in this dust bin I've set beside me on wood floor.  "Outside of repeated sacrifices, spiritual immunizations, the one time deliverance from sin spore is Holy Life blood flow." It's settling in true. Because I know blood is cleansing; and I know life is delivered through blood.

But the grave, womb? I can see that. When the stone was rolled away, womb opened. I see it. Because grave holds death; but womb holds life. And Life conquored death and turned grave into womb. Life emerges from womb when labor is the hardest. I know that much. Felt it with second son when labor would have taken me. But that's all. Just labor. Not sin.

I lean broom against the wall and just bow. "I asked for You life, and you gave it to me." That's all I have to say.

"If you abide in Me, and My words abide in you, you will ask with these words that I speak on My Father's authority what you desire, and it shall be done for you. By this My Father is glorified." He's speaking John fifteen and verse seven to me. Speaking more about glorifing the Father to me. Tells me what it is. It's to have His word just so much a living part of my thoughts, soul, and desires that it becomes what I desire to ask of Him. It has everything to do with prayer that is answered. Done.

Do I want to glorify my Father? I do. It's just in me, because His Spirit is in me. Then I shall speak His words to Him until my ear is so tuned to His word that it becomes my inner desire. It's becoming my life practice. And I'm watching Him do. And this is glory; this is what I recognize when I see it. It's just all out amazing and miraculous glory.

Posted by Carolyn-Elizabeth Roehrig No comments: