Great heave and pant thunder and just throw air. Just pitch it at one-hundred eighty miles per hour 'til window rattles in pane and tea cups tap dance all nervous in curio on wall and trees break. Just break.

And fences are torn down. It's what happens because lightening is machete in God hand. He is light. He is Word. Word is sword. And sometimes it's machete swinging slice. Opening path. Cutting through dense darkness.

Sometimes the Light is not gentle filter through jungle. Not satisfied to dapple hints at a pathway we've let grow dark for lack of weeding and tending because we refuse to pick up Sword-Word. Refuse for a million reasons to clear jungled life and jumbled days and to break at trunk thoughts that branch over; and refuse to invite Light. We might welcome Light; but that's not the same as invitation.

Maybe we refuse because we fear the wrong things and don't know how to fear the right way. Fear storms and fear the dark, and find the refusal. But fear the Light the right way and it'll pour in where it's slashed through, and burst in like fireworks where it's slammed down fences 'til thoughts are uprooted and 'til the life those thoughts support, dies. Just falls over and dies.

I watch it from the big window. It's rattling and I'm adding awe and fear together. It equals wisdom. It equals worship. It equals grace. It equals, "I Am the Way, the Truth, and the Life." Add them and they are summed up together by white hot light. Holy Light sums awe and fear. And only machete in God hand can add sums and divide and multiply at the same time. But fear rightly, and thoughts of the heart will be rightly divided from the intents of the heart; and grace multiplied, and worship added. And I'm sure there is subtraction and square-rooting and math I've never heard of, but it's enough to know the Sword that clears the jumble and lights the path, sums up the fear of God in light and awe.

Can I fear like this? Will I? The other way is easier and makes more natural sense. Fear the dark. But the right way doesn't come naturally. Fear Light? Fear because Light slams fences down 'til we are open. Until the path is clear. Until we walk it because we can see it; because dark places and barred fences gape wide open when Light strikes them. Fear like this and know the "some" part in awesome and fearsome. It's worthy "some," and it's the sum of this strange math that God works.

The fear of God is the beginning of wisdom. And wisdom calls out truth and shows the way to the Life.

This is the odd trail my thoughts take tonight while watching lightening storm over backyard. It's backyard bunny-trails and back-soul bends. And this soul bends desperate for clear pathway. 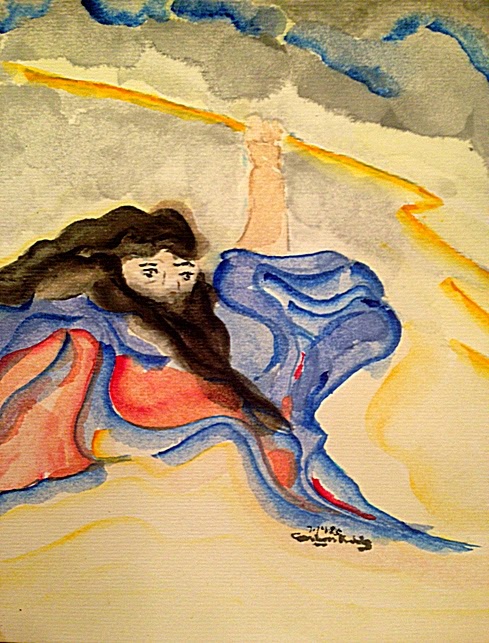 Lightening bolts straight down and wide. "You're not satisfied to hint at a path through the dark, are You, God!" But I need more than a hint. I'm thinking this is a good working relationship.

"Did you see that?" He says it kind of gleeful.

"Well, yeah, it was a little hard to miss!" I say the obvious.

"Well, yeah. That was a little hard to miss, too!" We're enjoying this banter between thunder and lightening, and it's affecting our conversation. "It kind'a went straight down over there and, um-m, did it strike something?"

"You mean after that?"

"Um-m." I'm staring at the receeding storm. He waits while I think. "Can You give me a hint?", says I who admits to needing more than hints.

"Are you stumped?" And I'm thinking about splintered tree trunks. And paths getting cleared and overgrown places opening in a single swipe of light. I want to know the path way.

Turns out, lightening leaves a "conductive path." I googled it and got that big word.

"Well," I say feeling smarter for knowing the phrase "conductive path," "wherever it went, it left a conductive path." And that's good enough for me.

"I am the Way and the Truth and the Life. No one comes to the Father except through Me." I hear Him say this and it sounds like, "I am the Conductive Path." It's how I hear John chapter three, verse sixteen right now.

I want to stay on the path. Don't want to lose track of it in the the storms. Don't want to trip over myself or anything else in life's jungle. No. I want to be conducted right through Christ to the Father. Because when the clouds lift there are a milllion-trillion stars and they burn like campfires up there, reminding me that I'm just camping down here. 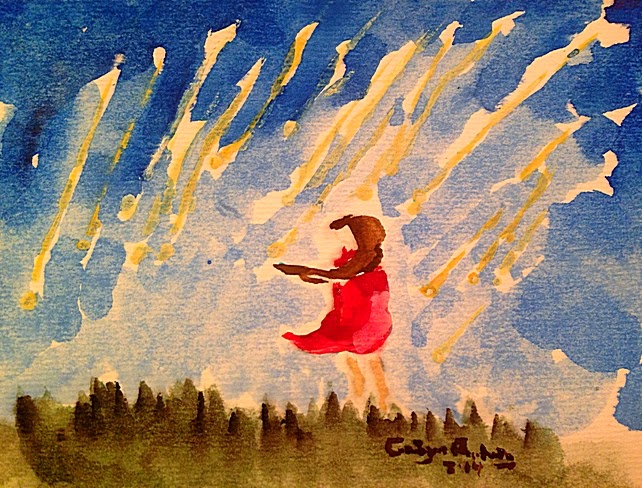 One day the stars will burn down and lightening won't bolt pathways and if I have to uproot now to get out of my own way to follow the Way, then, "Uproot me in storm, God. Divide the thoughts and intents of my heart at root." I whisper it brave and urgent against pane. And against pain. And fear and awe share the same breath and lung.

"Divide 'til my worship is multiplied." And right now I can't imaging refusing Him for anything. I'm sure I'll find reasons tomorrow, maybe even before then. But not now. Now it's just awesome, fearsome worship at big window.

To listen to this song, click on:
https://www.facebook.com/photo.php?v=833541886663869
or
http://www.songsofachristianhomemaker.blogspot.com


vs. 1
God of sea and sand
God of waves and wind
I praise You on this shore

vs. 2
Every horizon
Wraps earth and sky
and Your arms hold me close

And I just can't get over the awe

vs. 4
Sun-touched on this beach
splashing my family
and God is laughing

vs. 5
Moon-struck on this night
million stars fill the sky
and God's humming