I found the manuscripts the other day. They were buried in one of the computer files I was cleaning out. Some three years ago I put together a couple books and named them Pisteuo! Connecting with God's Heart. They're sisters. Paintings illustrate one. Songs illustrarate the other. I'm bringing them together.

Chapter One
What It’s All About
I have some skin in some battles, but I didn’t choose any of this. I’ve made acquaintances with an Exodus angel, and I don’t understand God as I thought I did when the battles were sane, contained, and acceptable. It’s true that some battles—the ones that aren’t labeled—are more accepted and more understood than others.
But some battles are labeled, and the warrior is called by the name of the battle fought. “Unacceptable” battle gives the warrior a disreputable name because, surely, the successful who dress well and have nice homes and hold respectable jobs don’t have the unacceptable addictions to sin and are certainly not genetically or otherwise predisposed to anything on the list of “unacceptable.”
Aren’t we all predisposed to the disease of sin? It’s unease and disease, and it shows up one way or another. It’s soul genetics. 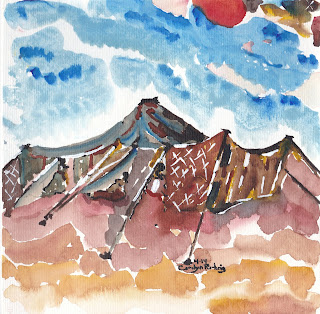 Desert Tent
Sin is like wind that slaps a tent canvas hard in the force of its blow, and we are the tent. Sometimes the canvas wears it well enough. Unease merely ripples gracefully across the tent’s skin, and sand may side-wind in between the seams, but no one blinks at that. And so the tent is labeled respectable and inviting.
But snakes side-wind too.
Other times the canvas rips, and the tent is torn ragged till its insides are turned out, and the label is “unacceptable.” Never mind sidewinders. Never mind not blinking till bitten.

Sandstorms in desert places buffet our souls’ skin raw and make our eyes tear and lash our tents.
This tent has gone down like that raw skin. A woman bends over and stammers as she dodges dislodged tent pegs and watches the canvas get pounded. Her cries go unheard because the storm is deaf and deafening.
Sin is a deafening disease and is deaf to holy cries. It’s a blinding disease and is blind to cries for light. But holy hears, and light sees.
Pay no mind to how you wear sin, acceptable or unacceptable. It still will wear you out because sin is always disease. I’ve worn sin acceptable and not and then wanted to wear nothing but holy, whatever that looks like.
Holy does strange battle.
Holy leads us deeper in. I know it led me deeper in and led my German husband deeper in. I went further in till it was “Onward Christian Soldiers” strains of refrain.
Christian soldiers go onward, marching as to war, with the cross of Jesus going on before.

Christ, the royal Master, leads against the foe.

He marches forward into battle, His banners waving.

It’s a hymn writ inside canvas skin when all else inside has been turned out and dumped. 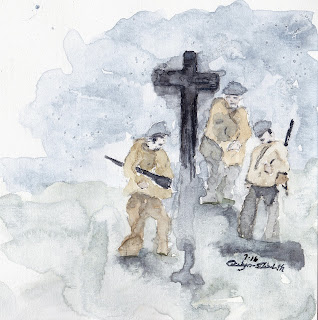 This bit of Christian soldier and her strong German have gone forward to an odd battle. We tread where led, where people whose tents just ripple nicely in uneasy breezes dare not tread because they have too much to lose. But it’s the only place left to go when too much has already been lost.
So we go.
We go into the fields of sin to fight there and flesh out the faith victory.
Aren’t the battles against sins won the same way the war against the whole of sin was won? Not by the death of sin, but by death to it?
Sin remains the same, but Christ is resurrected. Sin remains death. So die to sin, and be resurrected. Nothing’s changed about it. Only God can lead so strangely.
God Himself fought to the death, the death of His Son, because only God can resurrect.
“Christ, the royal Master, leads against the foe,” as the hymn goes.
The foe?
Surely sin is foe, but isn’t being alive to it, bowing to it, serving it, the greater foe?
Didn’t Christ show this when He led to the cross?
Didn't He die there because of sin, so that we may die to sin and not serve it?
Sin is still breathing foul, but let Jesus’ last breath be mine.
Let His resurrection be mine.
Then I will live and breathe-
sweet and free-
not because sin is dead in this world,
but because I will fight till I’m dead to sin.