New Years Day has come and gone, and left me behind in the confetti this year. I'm still gazing at the Nativity scene beneath our tree which is still up and loosing needles, a confetti of it's own, which I'm finding.

This big German I'm married to hauled in bags of sand to spread on plastic sheeting beneath the tree. He sculpted a desert and placed figurines of shepherds and their sheep, desert dwellers young and old, men and maidens who come just as they are to the rough wooden stable he placed beneath the shelter of tree boughs. He placed votive candles throughout the scene.

I light them now for Epiphany. 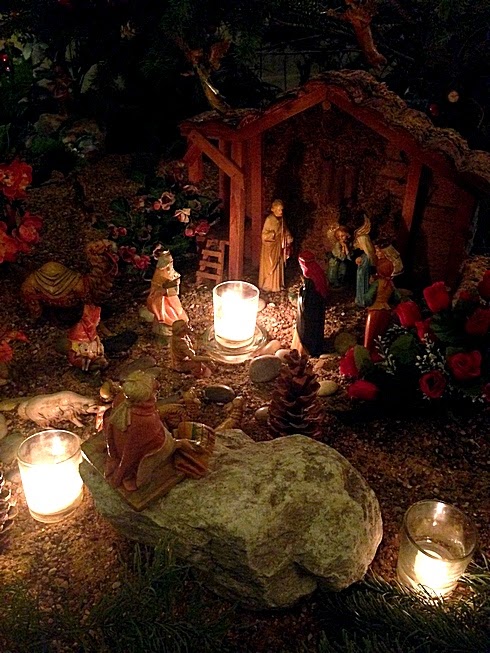 The Light Has Come
Epiphany. The word means, "to shine upon," "to reveal."

I light the votive at the entrance to the stable. A star touched earth like no star ever has. The Light of the world was delivered in light. "Your Light is come." I say it under my breath.

It's Epiphany day; different than Christmas day when I lit this votive. Different because the day Christ was born, the Light was announced to the shepherds in the surrounding fields and they came in mass to Christ.

Did they cradle Him in shepherd arms that instinctively knew how to cradle a lamb?

But when kings from far away came and beheld the King of kings, and bowed to Him, the Kingship of Christ was announced far beyond the surrounding fields and to the whole of the gentile world.

Their arms wouldn't have instinctively known how to carry a lamb, but the Lamb knew how to carry all, and "Your Light is come," is too big for under breath whisper. It's proclamation call carried beyond the fields and the few, to the edges of the earth and to all nations.

The edge may be pulled under a briney dark tide, but light spills like fresh cream from the Indian moon and in the light can the hungry fingers that claw at sands edges be turned palm up in worship on the edge they rip into? It happened on that beach. Palm up worship.

Nations may dip into ink pots and be veiled to the difference between ink dabbed and light poured. But light pokes through veils like stars point through the veil of a dark night; and tiny dabs of starlight form dippers big and little and ladle light out like liquid over a nation that's dabbed darkness right between the eyes, and then wash a nation in quenching light. This is happening, too.

I look at the burning votives, and the string of lights on the tree. I step outside and look up at the burning string of starlight that winds glory intricate across the sky from the cusp of my back patio to the beach just down from the flat where my girl is waking to my tomorrow, because the stars string across time zones.

"How," I wonder upward, "did the Magi turn to go back where they came from?"

"They turned to go back to their country by another way." The answer is given and I hear what's just just beneath it.

"Repentant." I know how they turned. It's how all who bow to the King of kings and to the Prince of Peace, and who cradle the Sacrificed Lamb, turn.

I know it's true. "Then," I continue speaking upward, "may I never be satisfied to say, 'I've seen the Light! I'm born again!' but 'I've cradled the Lamb. I carry the Light.'"

"May I live so," I speak it and the plea hovers silent on the cloud of my breath in the cold night air. I 'm looking up at the clearest billion reasons to hope for the nations. "May I shine so," I breathe into the darkness.

I just keep looking up. It's cold. My neck is cricked. But I can't look away. I just can't. I look up at the strings of starlight edging the heavens and wrapping 'round this earth and, "May I be such a light, one in a string of believers, shining in the darkness and extending Your kingdom."

This is my Epiphany prayer