Can I Just Make My Whole World About This?

"And the tax collector, standing afar off, would not so much as raise his eyes to heaven, but beat his breast, saying, 'God, be merciful to me a sinner!' I tell you, this man went down to his house justified rather than the other; for everyone who exalts himself will be humbled, and he who humbles himself will be exalted.' Then they also brought infants to Him that He might touch them; but when the disciples saw it, they rebuked them. But Jesus called them to Him, and said, 'Let the little children come to Me, and do not forbid them, for of such is the kingdom of God'" (Luke 18:15-16).


It's a freedom to leave the lifting to God. A freedom to leave it in His hands to do. After all, it's how He made the first man and woman. He formed the man from the dirt and lifted him right up from the ground. And then He told the man to lay back down on the ground, put him to sleep, and lifted the woman of his dreams right up out of him and that was the first dream come true!

I've learned that the Latin root for the word "ground" is "humus." It's pronounced "hyoo'-mus" and is the root word for "humanus" (hyoo'-man-us) which means "man," as in "us." And then there's the word "humility" (hyoo'-mil-ity) which comes from "humus;" and I can't help the word play. God's the linguist and He has a sense of hyoo'-mur. He lifts up the humble today just as surely as He lifted up Adam from the humus.

Humility means "to have a clear perspective and respect for one's place in context" (wikipedia).  I put it together like this: The clearest perspective and greatest respect I can have regarding myself and others is to stay grounded and to leave to God any lifting up of me.

Can I just make my whole world about this? Can I put my whole world in His hands like the tax collector did? He put his whole world in God's hands when he prayed, "God, be merciful to me a sinner!" Is this the first place in the New Testament where the "sinner's prayer" shows up?

I wonder what he did when he left the temple liberated by the freedom humility gives? The freedom is given in the absence of what we call with a bit of pride in the voice, "the self-made man." When my perspective isn't clear in the properly respective context of humility, then this lil' bit of humanus in the likes of me is too heavy for me to lift without falling; because pride comes before the fall and pride is heavy.

Thing is, there's still some pharisee in me. I catch myself passing judgement. I do. And I'm disciple too, and still as prone as they to get too big for the  britches sometimes. I'm tax collector, saved; and yet sometimes wanting to collect some debts. And I'm infant weaned and content to let Jesus touch me and hold my whole world in His arms. I'm saved by this Savior who freely gives salvation, and I'm disciple walking this humus ground; and humility costs everything.

Humble Jesus paid with His life, and with more than I may ever know. He paid. It cost Him the pain that my sin was causing me; and is the cost still being counted though the debt has been paid? I wonder, because I've always been flesh and blood conceived in sin, hell bound, but He hasn't.

I gain what I've never known: heaven and full redemption; and become what I've never been:an unwrinkled, spotless bride.  He lost what He only knew, and He will never get it back completely. He is no more purely Son of God, but is also Son of Man. And isn't this the acceptable expression of a groom's love for his bride? That a groom in love with his bride would take her pain in an instant, if he could?

The only Groom who is able to do this is Jesus. And He did.

I can't be humble enough to be adequately humbled by this kind of love. I am too imperfect to know how to be humbled enough. 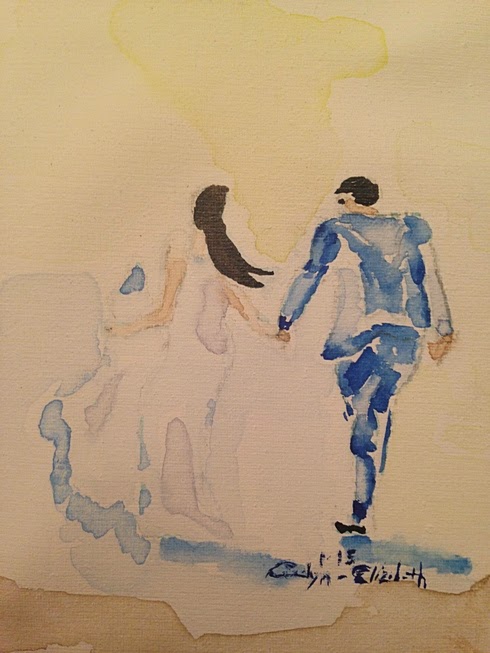 I listed in Chapter 3 of The Devotional some ways to humble myself . Now some ways to be humbled by God's love:

-If I never learn anything more through hard times than to hit the humus and wait for God's touch and His arms that lift, then this would be enough for everyday.

-Jesus hurts when He sees me hurt. He's felt it and more than it, before.

-His love is balm applied to my pain, and His.

-He left His home; and when He ascended and went back home He sent the Holy Spirit to speak the Word of God and His own new speech became to intercede for me.

-He chose to labor for me, to deliver me, and forever He bears the marks of the delivery.

-The marks stretching across my belly are humbling reminders of His love.