Rest Is Not A Waste Of Time

Shadows play on the the ground.

I hear my neighbor across the alley empty discarded kitchen scraps, the contents of her white trash can, into the large one at the end of her driveway; and a baby grasshopper no larger than a shred of lime rind lands on my finger and stares at me with red eyes too large for it's body. I encourage her onto half an old pecan shell. Some squirrel cracked it open last fall, consumed the pecan, and discarded the scrap. 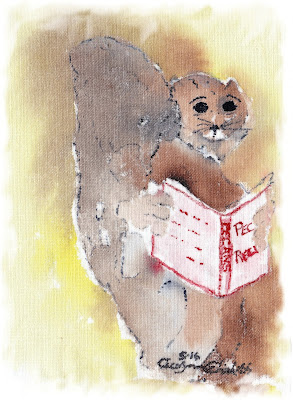 I take a picture of the grasshopper to paint later.

It's a Sabbath morning in my backyard, and everything is as it always is. busy ants haul bits of I don't know what, insects float on light and it seems one of them has fallen into my coffee. I rescue it from an untimely death.

"Hmm?" He's mellow on His day today, back here in the yard with me.

"How would You like me to spend Your day?" I'm certain I know what His answer won't be. It won't be something like, "Don't lift a finger today, don't rescue an insect from drowning in your coffee, and certainly don't take out your trash!"

I close my eyes to better hear what His answer will be.

Bird song, wind song, and the swish of leafy skirts dancing in the boughs that hold them tight to themselves lest they fall. This-all this-is His answer. 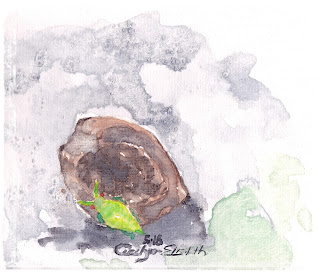 Doesn't He own everyday? Didn't He do the same things on the Sabbath Day as on every other day? Weren't those who sacrificed doing all things-including things merciful-those who received a tongue lashing from The Lord of this manor called Today!

I live in Today.

I rephrase my question to Him. Instead of asking how He'd like me to spend His day, I ask, "What are You doing in Your manor?"

He laughs. I hear it right after I ask the question. "That's funny!"

"Ha! I get it! What're You doing in Your manor-in Your manner!" He and I, we share the corny pun and maybe He laughed so with His disciples at puns in the grain field.

It's not new or un-ordinary. Birds sing everyday. Wind does too. I catch song and laughter in chimes. Leaves twirl, happy giggle in the strong limbs of tree everyday.  "So what makes today, one day out of seven, different?" I ask.

I know the commandment to keep holy the Sabbath, and I know God rested on the seventh day. His rest makes it holy. I know these things about the Sabbath, but there's a lot more that I don't know about it.

How, for instance, is the Sabbath a day set apart when Jesus seems to have done the same things on the Sabbath Day that He did every other day? It wasn't only on the Sabbath that He desired mercy over sacrifice.

I wonder, too, what it looked like for God to rest on the seventh day. I wonder if what He means by rest hasn't been misinterpreted.

Didn't Jesus, after He healed the man too sick to get himself into the pool when the water was stirred up, answer the Jews who sought to kill Him for doing this on the Sabbath, "My Father has been working until now, and I have been working"? He did. And when the Jews sought all the more to kill Him for this, He said to them, "Most assuredly, I say to you, the Son can do nothing of Himself, but what He sees the Father do; for whatever He does, the Son also does in like manner." The conversations are written in John 5:1-19.

"There's that word, manner, again!" It leaps from the page."There's Your answer to my question!"

"What I do in Today, do it in like manner." He instructs me to do what I see Him do, just as what He does is nothing other than what He sees His Father do.

"Where's the rest in all this doing?" Something holy niggles at the back-side of my spirit. "Bring it to the front," I pray.

"I'm here." The answer is standing right in front of me. He, the Lord of the Sabbath, He is the rest.

"I do not desire sacrifice, but mercy." He prefaces His declaration that He is  Lord of the Sabbath, and I hear Him to say it, "You are relieved from the requirements of the law. I  have fulfilled them. I provided the sacrifice and I provide the mercy." 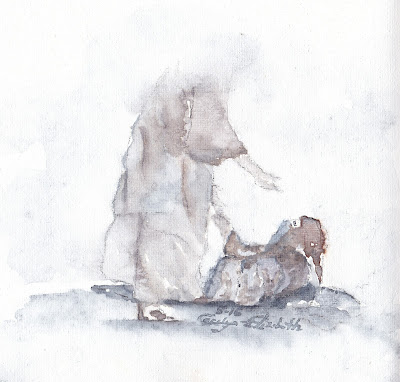 Jesus and the Lame Man

My brain is hurting, but I persist as one hungry in a wheat field on a Sabbath Day.  "Feed me the grain of the bread of life! Feed it to me raw!"

He does. He feeds me Colossians 3:16-17. "Be filled with psalms and hymns and spiritual songs, and sing with grace in your heart to others and to Me. And whatever you do in word or in deed, do all in My name, giving thanks to God the Father through Me."

"So, whether I work, or whether I rest from all the work which I have been doing," I piece His words together and they sound familiar. "Where have I heard this before, Lord?"

"You've read it many times," He hints and then His Spirit whispers it into mine.

Holy. It's the essence of His character. His whole character is holy. His works are good; His rest from His works is holy; His Son is my entrance into His rest.

A yellow bee buzzes around my knees. Yellow dog nudges me for her biscuit. I stand up slowly, a tad stiff from sitting here so long.

Of course. That's what He does. He hangs out, redeeming time, and doing a bunch of mercy because that's what's left to do.

He's already fulfilled all the requirements of the law, including the do's and do not's of the Sabbath laws.

"Oh, and I'm also speaking to others in psalms and hymns and spiritual songs, singing and making melody in My heart to My Lord." He's reading Ephesians 5:16-21 to me. He's telling me what wastes time and what saves time.

I want to redeem time in His manner, and in Today. "I'll speak to others in psalms and hymns and spiritual songs, singing and making melody in my heart to You, my Lord."

There's more. He speaks it to me and I follow along in the next verses, "I'm also giving thanks always for all things to God the Father in My name, and submitting to others in the fear of God."

"Submitting to others?"  Holy sacrificed once for all; holy submits always in the fear of God. It's what He's done, is doing still,  and will do eternally. Well, it's crazy humble, but yeah, the Holy Servant submits holy.

It's part of redeeming time in these evil days, in His manner, and in Today. "I'll give thanks always for all things to God the Father in Your name, and submit to others in the fear of God." I may not know all of what that means, but He'll show me what I don't know. For now, whether it's Monday or Sabbathday, my rest is in Jesus, the Lord of the Sabbath.

Whether it's Monday or Sabbathday, mercy everyday is my work and rest.

Today I've asked the Lord of the Sabbath, "What are You doing this day?"

He's invited me to join Him in it.

We, He and I, are singing, giving thanks, and submitting to God and others in His name.

Whether it's Monday or Sabbathday, rest in Jesus redeems time.