The grain they plucked from the stalks in the grainfield, they rubbed it between their hands, shucked the chaff, and ate. Yeah, it was the Sabbath and illegal, but Jesus said it was okay. He knew Andrew and Bartholomew, the two James', John, and even Judas, Thaddeus, Matthew, Peter, Philip, Simon, and Thomas were hungry and He was, after all, the Lord of the Sabbath and the fulfillment of the law. Who can argue with that?

The Pharisees, that's who. They tried, anyway.

I take a step back and it's almost funny. Actually, it is funny. I wonder if Jesus'  twelve "Manwich" men, nibbling on raw grain but hungry enough to eat a bear, sorta' smirked a tad because they saw the Pharisees watching. Did they kinda' rub the grain in Pharisee faces and chew a little louder than they needed to? And did Jesus shrug His shoulders and roll His eyes up toward heaven as if to say, "They're Your boys, Dad; I'm just the older Brother!"

So, I'm in this room all by myself swallowing a giggle that wants to win, and does win the instant I remind myself that I'm not alone. God is present, and I just shrug my shoulders, "You're the One who named me Joyful Song-Set Apart for the Lord!"

In that grainfield there were The Zealot, The Rock, The Man, and The Savior of the World. Maybe I've been too influenced by Hollywood, but I picture the Pharisees a little whiny, "Wh-hy are you
do-ing what's not lawful to do on the Sa-abba-ath?" Those were their words. Read it in Luke 6:2.

Jesus answered, and I can't help but hear a bit of holy sass, "Have you not even read this, what David did when he was hungry, he and those who were with him...."

Did the twelve munching men adjust their shoulders till their arms angled out, and then stand extra tall? Maybe. They were those who were with Jesus.

Jesus continued, "...how he (David) went into the house of God, took and ate the showbread, and also gave some to those with him, which is not lawful for any but the priests to eat?" Then He said to them, "The Son of Man is also Lord of the Sabbath" (Luke 6:3-5).

I don't know about Judas, but those men must have busted a gut once the Pharisees left. 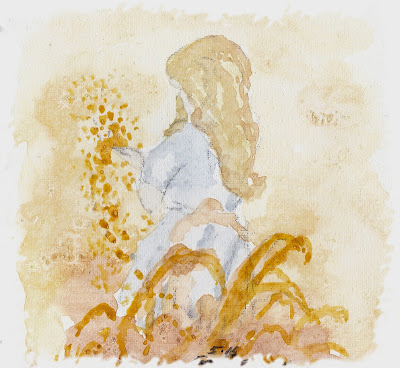 Somehow grace disarms whatever powers take up arms-whiny or not. Somehow, too, when grace is in charge then the outcome-whatever it is-is never less than grace filled. Sometimes it looks like it, sometimes it doesn't; but none of that changes the surety of grace.

Grace can be trusted because it won't buckle.

Grace manages to bring levity without making light of the serious.

Grace filled, David did for his men what they couldn't do. They couldn't-wouldn't dare-enter the house of God and eat the bread which was only for the priests. Better to be hungry than hung! And grace filled, Jesus defended David and his men, and His own men.

I'd like to be as sure as David in iffy situations, the thought replaces the laughter from moments ago. I think about the compassion David showed his men, and that Jesus showed His men. "Fearless compassion, Lord. That's what I'd like."

"Grace is full of compassion for the hungry," He begins. I think I know what His next words are going to be, because of previous conversations we've been having here in Luke 6.

He continues, "Grace is full of compassion for those whose hands are withered."

"You healed a man whose right hand was withered." I read about it and what's note-worthy is that He did it on the Sabbath in the synagogue. I might say that healing is note-worthy, and it is, but this-this on yet another Sabbath and not in some grainfield but in the synagogue-this is fearless compassion.

"This man I healed, he," the Lord's voice quiets and I get it.

I pick up where He left off; not that He needs me to, but because I want to be touched by this man's plight-to feel it-for the sake of nurturing the compassion I ask the Lord for.

"This man," I visit the feelings I've had toward the homeless people I've passed by on the sidewalks before. I let discomfort touch me, and continue, "he would have been unemployable." I stop and feel-just feel.

Once a week I find myself at a stoplight where homeless are allowed to panhandle. I feel it now, and inch forward, "This man would have been at the mercy of those who, like me, might help him, but not fearlessly."

My compassion needs what only God's grace can give-strength that won't fold, appropriate levity, discernment to name a few. Really, fearless compassion. Isn't that akin to the caliber of love that casts out all fear? 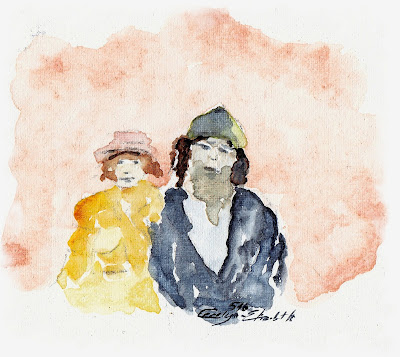 "Lord?" I'm thinking that if Jesus needed to stay up all night praying to God, then how much more do I need to spend every day, and pull some all-nighter's, praying to God? I don't know exactly what they talked about, but afterward He called His disciples to Himself, and it sounds like they made up a multitude, then chose a team of twelve and called them His apostles.

He hears my thoughts, but I need to hear them, too. So I start again, "Lord, may I remain with You as the disciples remained in the grainfield. May I partake from what You give me, and ask what I need. And may I not fear Pharisaical power which would take what You give to me and then shame us both for it."

Maybe, after these Sabbath run-ins with teams of law-enforcers, it was time to build His own team. A team of law-fulfillers, unlawfully filled with unflinching grace and fearless compassion. A team that would do what the law couldn't.

"I came down the mountain with them, My apostles." He recounts the Scriptures to me. "We stood on a level place with a crowd of My disciples and a great multitude of people from all Judea and Jerusalem, and from the seacoast of Tyre and Sidon, who came to hear Me and be healed of their diseases, as well as those who were tormented with unclean spirits. And they were healed" (Luke 6:17-19).


Ginger and Tommy, a married couple, lived in the park and loved Jesus there. I don't remember how we met them, but I do remember that they had sores on their faces, hands and arms, and that they'd been robbed of their tent-their home-and that they smiled and talked of little other than Jesus. We gave them sleeping bags and food money, and pulled the family van to the side of the road whenever we saw them. The last time we saw them, they were going to the train yard. They hoped to go south.

I read the next verse in Luke and, "Lord, it says right here that You lifted Your eyes toward Your disciples." I'm thinking there must have been something exceedingly note-worthy about the look Jesus gave His disciples for Luke to describe it. "Was there something in Your eyes that Luke recognized?"

He answers my question with His question, "What do you think he saw?"

"When You lifted Your eyes toward Your disciples?" I know that's what He's asking, but the question helps clarity.

"Mm-hmm," He waits while I find my answer.

I read the Scripture. I run the conversation through my head. I know I'll find my answer here.

I think of Ginger and Tommy.

Jesus pays close attention to everything that goes on.

I picture the man with a withered hand. He would have needed help to rub raw heads of grain in his hands. The scribes and Pharisees would have called him a thief and then stolen the grain from his hands. Oh, they likely would have done far more than that, but the withered ones live in a world that claims what they have, uses them up, then shames them for it.

I read about the diseased and those tormented by unclean spirits.

I hear and smell the great multitude of people that Jesus lifted His eyes toward. 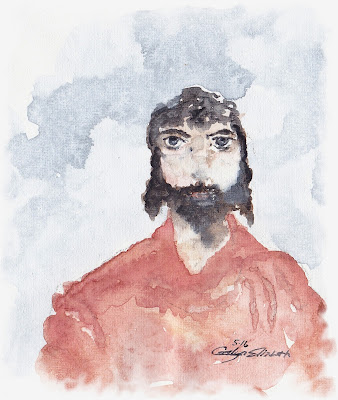 Surely, Jesus had on His mind every person, plight and poverty-on the Ginger's and Tommy's whose homes are taken but who talk more about the the kingdom of God than the home they lost because they just used that one-when He spoke His next words.

"Blessed are you poor, for yours is the kingdom of God."

Surely, He remembered the previous day in the grainfield when He said, "Blessed are you  who hunger now, for you shall be filled."

Maybe He lifted His eyes toward those crying, because disease is painful, shuns and is lonely, when He said, "Blessed are you who weep now, for you shall laugh."

Then maybe His shifted His eyes toward those tormented with unclean spirits who were reviled and hated, and then thought about His own plight when God would make Him,who had no sin, to be sin for us, and said, "Blessed are you when men hate you, and when they exclude you, and revile you, and cast out your name as evil, for the Son of Man's sake,

I picture Him pausing; loving the multitudes with that look-what did Luke read in His eyes when He lifted them toward the crowds? Was it note-worthy grace? Fearless compassion? Then I hear Him say, "Rejoice in that day and leap for joy! For indeed your reward is great in heaven, for in like manner their fathers did to the prophets."

His blessings may seems a little confusing. "I am blessed in my poverty, hunger, weeping," You say, "for I will be filled and I will laugh, and the kingdom of God is mine." I guess that all the tenses just run together in one past-present-future tense when the One who was, and is, and is to come speaks blessing. It's note-worthy, I think. It's recognized by those who see what Jesus sees-unrestrained by tenses.

"You asked me what I think Luke saw in Your eyes when You lifted them toward the multitudes," I venture.