These shadows, they stretch awake in the morning sun and yawn wide across Pecan branches. They stir awake, too. The morning breeze moves their knotted limbs and flexes their twigs as if nursing an old man awake and easing him out of bed. Rough, dry, stiff, the tree scratches  itself wherever its long limbs can reach, and groans.

The sun stretches, too. It unfolds light, and the light feathers out-just wings out-till it measures from wingtip to wingtip the span of this side of the earth.

"He who dwells in the secret place of the Most High shall abide under the shadow of the Almighty." This Most High, Almighty One, who calls Himself the Light of the World, speaks from Psalm 91:1 to me this holy morning in my backyard.

More lightly than air, the shadows touch the spring grass. And me.

"He shall cover you with His feathers, and under His wings you shall take refuge." He continues to speak to me.

I whisper to Him, "You are my dwelling place;" and backyard shadows wing weightlessly.

There is a secret place of the Most High, and this morning I'm watching shadows flutter and lift, stretch and flex. I watch them shift as the breeze riffles; and I think about this secret place.

The Lord brought a dear friend's father home today. Seems it was time, and he was ready.

He left a legacy behind which will be celebrated in the Kingdom at least as many times as those whom he led to the Savior leave this earth and enter the gates of glory when it's their time.

He will be there to greet each one.

He will introduce them to many other citizens dwelling there-there in the city of the New Jerusalem. It's described in Revelation 21:9-27 as the city that has no need of the sun or of the moon to shine in it, for the glory of God illuminates it; and the Lamb is its light.

"Where are the shadows?" They might ask. Maybe he himself is asking that question right about now. Maybe tonight he'll marvel at how there are no shadows lengthening, thickening and falling wide till the city is dark with night. Well, I don't know for certain if there are no shadows in Heaven. If there are, then they wouldn't be there because of the sun rising or setting, or the moon casting. 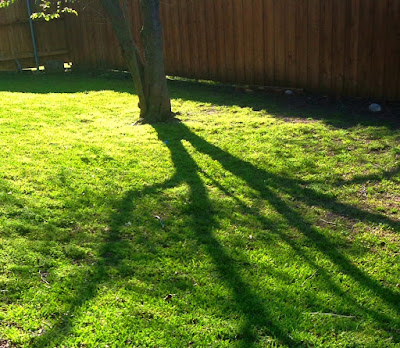 "Are there shadows in Your Kingdom, Lord?" The sun rises higher over me, and I think about shadows.

What is the purpose of shadows anyway? I guess they mark time as the sun and moon mark it-days.

"Ah! Days and shadows!" I remember what king David said about that, and I repeat it to the King of the Kingdom,  "Lord, what is man, that You take knowledge of him? Or the son of man, that You are mindful of him? Man is like a breath; his days are like a passing shadow." I don't remember the address for this verse, but I do remember what is said about man and his days and shadows and that's all I need to remember right now.

"You dwell under My shadow." He draws me into the presence of His light.

"Your feathers and Your wings cover me." I watch a bird over me get knocked a tad off balance in a gust of wind and its feathers ruffle in a spurt of energy.

He notices the bird, too, and says, "Take refuge under My shadow-under My wings-just for now.

Nothing knocks Him off balance. Nothing.

"Your wings are steady. Your feathers are unruffled." So many things in this world would knock me flat down off my tree, and would keep me flustering and flapping in continuous spurts of anxious energy-but any more? I just don't give those things much chance to do that much any more. I don't because I have flapped anxious, wild, and still been knocked off my tree, plenty enough times to learn something.

I've learned that His wings are steady, His feathers are unruffled.

I'm a sunlight dweller. I'm also a citizen of the Kingdom of Heaven where there will be light more glorious than the sun.

"Gladly," I accept His invitation, "I will gladly take refuge under Your shadow-yes, under Your wings-just for now." He knows I prefer light to shadow; and He knows that I hope in the eternal light of His glory.

Shadows dance with the sunlight. I watch them sway with the wind. And I plan my day beneath the shadow of the Almighty. I plan with Him.

"My day, Lord," I shift on the patio cushion.

I plan enough for a week. He laughs, "Girl who do you think you are?"

I'm His girl, made for His Kingdom where, as far as I can figure, there won't be shadows for me because there won't be sin for me to take refuge from. And isn't sin what I need refuge from, and have by the blood of Christ which covers the mercy seat forever?

I'm a refugee of the Almighty, taken under His wing for now; and as long as I'm in this flesh, I'm grateful for His shadow. It's mercy.

I'm His girl who longs to dance with glory in light and never stop because, where I'm going, the night shadows will never fall.

Thing is, my days are like a shadow-but He is mindful of me.

My to-do list rests on my lap. "Oh Lord, God Almighty," I begin to worship underneath His wing, "You humble Yourself when You do this. When You-all light through and through-provide me with shadow because You are mindful of me," I pause in thought, "You humble Yourself."

I glance at my to-do list, which He re-did, and I humble myself. I remember that I just told Him I'd take refuge under His wing.

He brought my to-do list back down to earth.

He tucks me under His shadow and whispers in my ear, "Just for now."