A Wild Side of a Simple Life

On this high tech, neon-lit, new-fangled and trendy planet, it's nice that every thirty-ish days the same moon that's been hanging out in the universe since the beginning of measured time is still an attention getter. It's just nice that a full moon still has viewers who comment on it's fullness. It's simply nice that, though no one says, "Did you see the half moon last night?", plenty comments are shared about the beauty of the moon when it's all lit up big. There is still something simple that commands attention simply being there. It's not dancing around the sky, or flashing, or sporting the newest trend in color. No, it's just simply noteworthy.

I'd like to simply hang out on this planet and shine the steady, non-flashing, old fashioned, full and noteworthy light of the same God who hung the moon and who has been hanging out somewhere beyond space and time forever and ever.

Once He did something rather flashy, nearly neon in the sky, and fairly new-fangled on this earth, and history has been remarkably marked by what He did into BC and AD measurements.

Maybe two planets, Jupiter and Venus, lined up in the sky to create the illusion of what we call the Bethlehem star, or maybe He just placed one very large star up in the sky just to present His Son. Whatever happened in the sky, it was noteworthy and large and bright, altered history, and fulfilled crazy promises from just as crazy prophets who passed them on to anyone who would listen.

And still the moon shone as it always has.

Maybe the moon was new that night when God's star stole the universal show; but it's circuit remained simple, unaltered, not thrown off it's loop for a single second. That's the the wild side of simple, and I yearn for it. 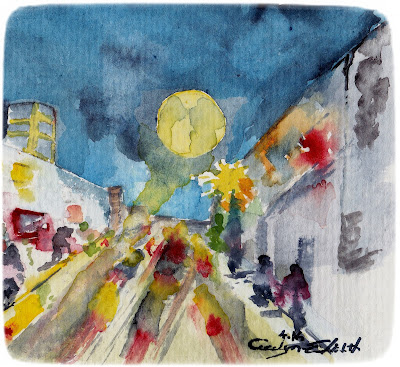 Neon and the Moon

It's wild to keep a quiet light in a flashy neon world.

Simplicity is wild in a complicated world.

Routine is wild in a trendy world.

When the moon is full, I look up. I even tell others to look up. Some might think I'd never seen a full moon before, but there's something noteworthy about a full moon.

I look up into the sky tonight. "It's beautiful, Lord." My voice sounds strained because my head is tilted back far, but I continue because the beauty of the moon pulls praise from me. I'm drawn by the strength of its fullness, as the tides are drawn.

My chest expands with deep inhale, as the very crust of the earth's surface bulges when the moon is full.

I raise my hands and praise, "Powerful. Predictable. Simple." I pause. "And wild, Lord."

I'm clothed in the pooled light right here on the driveway.

There's something wild about a simple full moon. Even the Latin word for moon, "luna," root word for "lunatic," speaks of it's mysterious wildness.

There's also something lunatic- a wee bit on the wild side-about me. There's a little storm-chaser wanna' be in me. There's a part of me that is fascinated enough to want to see a rogue wave, called a white wall, out in the middle of the ocean (from a safe vantage-after all, I'm only a wee bit bent wild).

I've read descriptions of them. They spontaneously appear and have been likened to a hole in the sea, followed by a wall of water as tall as a twelve-story building. The captain of the famous vessel, the Queen Elizabeth 2 described to London newspapers a wave that, "came out of the darkness" and "looked like the White Cliffs of Dover." He positioned the vessel to surf the wave to avoid going down. Yeah, there's just something about that kind of wild. 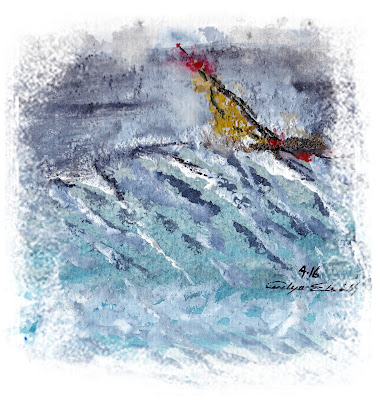 There are other kinds of wild.

The words of the psalmist who thirsts for God are rogue wild: "Deep calls unto deep at the noise of Your waterfalls; all Your waves and billows have gone over me. The Lord will command His lovingkindness in the daytime, and in the night His song shall be with me-a prayer to the God of my life" (Psalm 42:7-8).

It's wild that God casts my sin into the deepest ocean depths and forgets about it.

Light shines in the darkness and swallows it. That's a wild side of the simple truth about God's light.

A wild side of me dares to pray, "Search me, O God, and see if there is any wicked way in me," (Psalm 139:23-24), because there are parts of me too hidden for me to know them about myself. A prayer against the convolutions of wicked ways is, to me, a prayer for the straight ways all lit up and simple because of the light.

"How do I live a simple life, but not an unwise life?" I ask Him because I'm thinking of the scripture, "How long, you simple ones, will you love simplicity?" It's the voice of wisdom calling out in the streets in  Proverbs 1:22.

"The fear of the Lord is the beginning of wisdom," He reminds me of His word.

"And what, exactly, does that mean?" I'd like to know because, honestly, I have yet to hear an explanation that embraces my spirit as fully as the light from the full moon embraces me tonight.

"Turn at My rebuke;" He begins to answer me in the very next verse, and I don't know why I haven't seen this before. He continues, "Surely I will pour out My spirit on you; I will make My words known to you."

I hear Him in the full cast of moon light and I answer, "Cast Your Spirit on me."

He takes the line I throw and pulls me by the power of His fullness, "Cast your cares on Me."

Care-free may be defined as free to care. 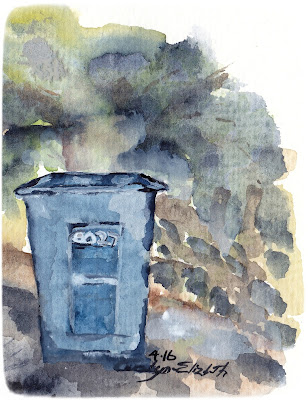 It's significant that the moon-that rock-draws earth itself till it bulges, and that the full glory of God reflects on the face of the Rock-my Jesus-who draws my very soul to Himself.

"Sunlight on moon rock. Intangible gaseous light on tangible moon-the rock in the heavens from the beginning of the ages-and light of God on the flesh called my heavenly Rock of Ages." My praise is scattered too big to articulate.

I stutter it wild, "You reflect the glory of Your own light, and," I pause to simply breathe, "I see it!"

It's wild to hear God say that He will pour our His Spirit on me, and to hear Him say so while I stand in a pool of full-moon light on the driveway just because of the most simple act of homemaking-taking out the garbage.

Is it just me, or is this a wild side of a simple life?