The car used to be free of crumbs. That was back when the car was a four-seater car and not an eight-seater van; when we had one child. The rule was, "No food in the car."

Then we had two children. "Can we have some crackers?" The firstborn could talk by then. "Cracker?" His younger brother knew that word.

"No-o-o," I'd coo. "No crackers," I was teetering on the fence and they knew it when I began to explain, "They're crumbly, see, and they'll stick to your cheeks all soggy ick." Pause. "I'll pack some carrot sticks."

It's a slippery slope from there.

Then we had three children. Baby sister sat on my lap at the breakfast table while the boys ate toast.

They chewed their toast into the shapes of pistols and opened fire across the table till they collapsed against the backs of their booster seats, limp and laughing, mouths full of half-chewed toast.

No toy guns allowed? I had no idea. I had boys. They got plastic pistols for Christmas that year.

I loved seeing pink booties and baby-doll dresses in the laundry. Yeah, sometimes I'd shake out cracker crumbs before dropping the dresses in the washing machine because, well, I was packing crackers.

And sippy cups of juice.

And, uh, M&Ms just sometimes.Whoever said the chocolate doesn't melt in your hands never had kids. The candy-coating melts first all sticky red, blue, green, and yellow. Then the chocolate melts.

Somewhere in there we sold the car and bought the van. And we had a fourth child.

More pink in the laundry room. More stain-lifter, too.

The fourth child doesn't know what a van looks like without a few wrappers, Ziploc bags, water bottles and, yeah, crumbs.

Well let's be honest. I had a small pantry in the back of the van and stopped short only of can openers and a Bunsen burner.

Crumbs? So beyond that!

I don't know when I began packing pink lip gloss, mascara, perfume, and scented hand lotion in the console of the van. And hair pins. Oh, breath mints, too.

Her sister and brothers are married and living near-by. Seems to all of us that she has a rare case of early on-set seniorites which affected her three years ago when her sister graduated.

Maybe I'm feeling a touch of seniorites, too. Maybe this explains why I'm perfectly happy to drop everything on a dime to drive ten hours to Taos to ski with my high-school senior and this happy big German husband of mine who's watched me grow up with our kids and who is himself cured of that pesky habit called planning.

The three of us arrived a mere fifty-eight hours after the decision was made at the family dinner table.

School? Hmm. I recall that we did talk about the days of unexcused absences our girl would have, on top of the tardies accrued from last semester. I think it went something like this-

The happy German was already on the phone making reservations.

Food in the van? I'll just say that in the time it takes to top off the gas tank, Ms. Seniorites and I sprinted into the gas station convenience store and came out with ice-cream drumsticks. 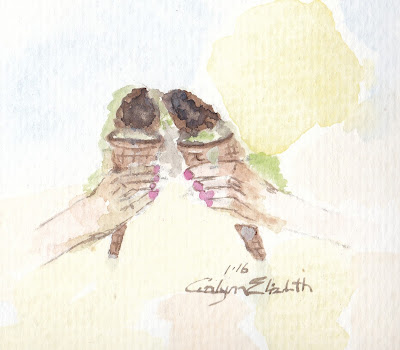 It's early morning, by vacation standards. I'm sitting on the kitchen counter to peer outside the window over the sink. The cabin is small, and this is the only window where I can draw back the green curtain just a bit without disturbing the sleepers.

The sun kisses the clouds awake, as a mother would kiss the sleep-flushed cheeks of her young children and as children might gaze sleepily into their mother's bright eyes, so the clouds seem to gaze.

"You are to me as the sun must be to the clouds." I gaze sleepily into the eyes of my Father.

The sky is what stillness is. And what depth is. The color blue wouldn't have recognized itself in the color of the sky, if it were possible for blue to see. So blue. Nearly purple. So profound. Seems to me the sun glows because she's held in the embrace of sky deep enough to find her joy in.

"You are to me as the sky must be to the sun. I find myself in Your depths." I worship.

The clouds are still this morning. They will rest still until a breath of wind from the heavens stirs them. Then they will stir. Swirl. Find their rhythm. They will move as the wind blows, where it blows, as fast or slow as it blows and they will be shaped that way.

The sun lifts the shadows off the snow; and the snow, blanketed by itself, blinks awake all glint and sparkle.

"You are to me as the sun must be to the snow." The light of His eyes makes me just sparkle alive. His light just does that!

"Live in My sight," He reminds and urges me.

"Your eyes are so deep," I'm transfixed.

"Live deep in My sight." His words are to me as wind is to the clouds this morning. His words stir me. 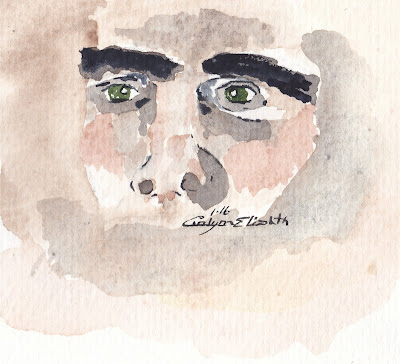 I long to live deep alive in His sight.

I long to bring His joy, His care, His very living, breathing holy Self to others.

I long to sparkle His light all wide awake and beautiful to those who sleep in the shadows.

I watch the shadows lift from the snow, and the tiny crystals begin to shimmer a dance before the shadows slip away, and I'm reminded of the fireflies that dance at dusk in the summer.

"See that, Lord?" I know He does. He's the One pointing it out to me. Sometimes He does that just because He delights when I exclaim, "Did You see that?!"

The dance is as effortless as play. It just happens because that's what snow crystal and fireflies do as shadows lift and fall at twilight and dusk.

"Did You give us snow crystals and fireflies to show us how to sparkle with joy deep and alive with no more effort than it takes to do what we are made to do? I ask the One who once said, "Let there be light," and commands, "Let your light so shine."

"Let your light so shine before men, that they may see your good works, and glorify your Father which is in heaven" (Matthew 5:16).

What is this light of mine which may shine so, if not both the reflection of His light on me and the radiance of His light in me?

"Your light is to me as the sun is on snow crystals and as bioluminescence is in fireflies." It's just not burdensome to shine like that. It's really not!

"Difficult isn't the same thing as burdensome;" I hear His reasoning from His word. It's written on this page I've just turned to.

"You are the light of the world. A city that is set on a hill cannot be hidden. Nor do they light a lamp and put it under a basket, but on a lampstand, and it gives light to  all who are in the house." This is what He says right before "Let your light so shine."

I read it and hear it as, "It's no more burdensome than lifting a lampshade." That's it.

If I find myself lifting weights and working up a spiritual sweat as I try to kindle a flame or create bioluminescence somewhere inside my being in order to shine, then I'm probably striving to make my own light. That's burdensome.

May I remember that I already have everything I need to live a-glow; to  shine the light of God in all I do.

He shines His light on me! "Just stand here and let Me shine all over you," He says.

He put His light in me! "This is yours to have everywhere you go," He says. "Play with it!"

"Play?" Why is that word so hard to pronounce? "With holy light?"

Funny. I can picture God playing with His light. He does it all the time. I'm watching it from this kitchen window. I'm watching His sun, the same sun He made when He said, "Let there be light." He skids sunlight over the crystals of snow because the sun is in His hand to play with like that.

I can picture children playing with light. Some magnify it and burn piles of leaves on the sidewalk with it. Hmm. Yep. I won't say whose children I've seen doing that.

I watch fireworks on the fourth of July, and waves all transparent gold-green wrestle near shore, and lightening roughhouse, and colors of light play wildly day and night all rainbow and aurora borrealis, and I've seen light dagger through icicles and explode in full prism, and light halo softly around a full moon and maybe this-all this-is what He means when He says, "Play with it." 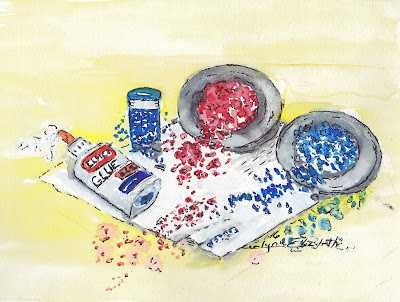 Maybe the way to experience light, and to learn how to live in light and by light, and to shine light and to be lit up by light, to touch it and feel it. to move in it and be moved by it, to watch it and to interact with it is to play with it.

Isn't this the way children learn about all kinds of things? Including light?

Might a mother give her children paper plates, crayons, scissors, popsicle sticks and tell them how to make pinwheels? Might her children run around with their pinwheels held high and watch the colors blur happy? Might could be!

And what about making shadow stories in a darkened room behind a sheet lit up with a light bulb?

Or what about punching holes in index cards, lining them up, shining a flashlight into them and learning that light travels in a straight line?

What about holding a firefly in cupped hands and watching light move around?

"Yeah," His smile lights up His face. And mine. "I am the light of the world! My path is straight. I move joyful blur.  I am all color. I mix light on the palette of air as you mix paint on your plastic palette. I am light in you, on you, and you radiate My light without even knowing it."

"Kind of like ice crystals and fireflies!" I exclaim, all child.

"Kind of like ice crystals and fireflies," He nods.