Jesus. A borrowed donkey. Crowds. "Praise God!", they shouted. "Blessings on the One who comes in the name of the Lord! Blessings on the coming Kingdom of our ancestor David! Praise God in the highest Heaven!" (Mark 11:9-10).

How still, focused, His heart must have been. Was He contemplating His last days on this earth? Borrowed, too? The eternal One borrowed the tock of time; yet the Father had given all things into His hands, and somehow His hands were fullest when they gaped wide where the nails gouged through. The hands that held all things, tore holding a nail. And some say that He became sin for us, but wasn't it enough that He held sin for us? That He owned it? Took it into, literally into, His hands and carried it away forever?

Well, He passed through the crowds and simply entered the temple. That's all. Oh, and He carefully looked around. And I wonder, "What was that hoopla all about?"

I'm sure most of the crowd really had no idea either. Most get caught up in the excitement. In the loud. But what of those who worshiped in the loud, "Hosanna in the highest"? Did they have an inkling back in their souls what this was all about? Did something stir within those who would themselves become living temples for the holy Christ, inhabited by the glory of His Spirit after He gave it up? Did they, like Mary, mother of Jesus, ponder these things in their hearts after the crowds dispersed and Jesus looked silently and carefully around the temple that had become a short cut for merchants because it was quicker to trample through the holy place than to go around it in reverence on the way to work, and that had become prostituted, defiled?

NOW HE IS RISEN! 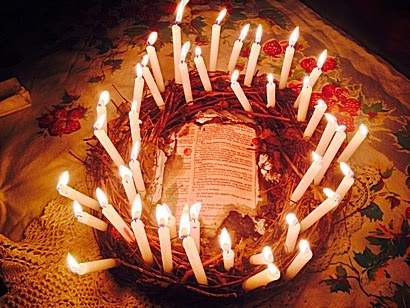 My Lent Journey-40 candles, 40 days, and the crown of thorns is crown of glory light

He left the temple after looking around, and the next morning He cursed a fig tree. I can't escape the sequence of these things. The sequence of riding into Jerusalem, the crowds and the garments and leafy branches cast down; His entrance into the Temple. And then He curses a fig tree.

"Surely, Lord," I ponder these things in my heart, "You weren't angry because Your stomach was growling and You wanted figs." He's not a spoiled child throwing a fit of divine proportion.

I wonder about the fig, because there's something spiritual here. I google. Yeah, I know, but this temple that I am is in the iPhone era. So I google and find that the fig symbolizes fruitful abundance and blessing and some called it "the fruit of Heaven."

"You looked around the Temple. Carefully." My pondering continues. "Were You looking for fruitful abundance? Hoping to find a single seed of holy worship somewhere in the Temple? And did You search through the fig leaves with the same hope?"

"I hunger for fruit that blesses the Kingdom of My Father." It's His response.

"I want to feed Your hunger, Jesus." And I do. I want Him to be happy when He looks around my inner life and I'm bold to say it, "I hope to have Your attention when You search the earth to and fro. I hope You may see a branch of fig tree bowing 'neath the weight of the fruit it bears for You. I hope to bless You like that."

He is quiet. He lets me chew on these hopes of mine. He gives me time to ingest them.

I take the time, quietly. Slowly savoring sweetest desire in the way that the gentle flavor of figs is tasted fullest. It's a gentle fruit with mild flavor. It's not a loud, here-I-am kind of fruit, but one that hides under fig leaves. It's a modest fruit. Modest, but full of tiny seeds. Just so full that there seem to be more seeds than flesh.

AND HE IS RISEN!

He quirks a brow and, "Mff, fmm hmff!" He sucks His cheeks in, but a smile breaks open and He's got tiny dark seeds caught between His teeth.

I smile back, because I do too, and we grin just all figgy at each other. Swallow.

"I know," He wipes His mouth with the back of His hand.

"I do want to be full of figs. Full of figs heavy with seed," I explain more to hear myself say it.

"My sweet fig," it's a new nick name, "the words of your mouth and the thoughts of your heart are pleasing to Me."

Aren't the most pleasing words to Him the words that He has spoken? And surely when I speak what He's spoken, He will be pleased to do it. It's true. He says so. And whatever is holy fruit in this temple that I am, is fruit to satiate Christ's hunger.

Jesus went to the temple looking carefully for any fruit, even a seed small as a fig seed. Then He went to the fig tree and looked carefully for even one fig. He found no fruit in temple or tree and overturned tables and withered the tree.

Then the third day He said, "Have faith in God. For assuredly, I say to you, whoever says to this mountain," I stop here mid-sentence, because He's pointing to the mountain of fruitless and now dead fig tree.

"It's a mountain," He responds.

I continue the sentence, "whoever says to this mountain, be removed and cast into the sea." I say this and, "Lord, I don't  doubt." And I don't. I don't doubt when I pray His word. It's His word.

And this is how a mountain of fruitlessness is cast out all withered.

"I can't doubt in my heart, but can only believe that those things which You say will be done." I confess this, and somehow this confession is found growing in the fold of living forgiveness just as figs grow where fig leaves enfold the fruit.

AND HE IS RISEN! I know this is true. It's why I pray His word.

Remember the hour when I chose to pray Your word?" I had run out of my own words.

"Oh, I remember it clearly," He just laughs with a Father's delight when a child begins to sound like Him.

"And You remember when I chose to forgive. When I just said, 'I choose,' even though I didn't know much more about the choice than it's what You said to do."

"I know," I sort of laugh about it a tad embarrassed because forgiving is a hard learned and oft repeated practice and in those days, 'I forgive' was what I said. It's just what I said.

"And now?" He prompts because a glance back is all that's needed. Just a glance

"And now!" I exclaim. "And now, truly, my prayers are answered. Just answered like You said they would be.

Well, I say "my prayers," but what I mean is "His word." He answers His word; and I make His word my prayers because His word's gotten into me just as miraculously as seeds somehow get into the flesh of the fig. For me, if "No" is the answer then I figure I prayed not in His name, but in mine; because God never says "No" to His own word. Never says "No" to His own name and character.

"My dear," He says it with that tone of knowing tenderness, "you need not feel apologetic for how it sounds to say that I have answered every prayer you've prayed, believing because you don't doubt My word."

"Thank You." He's said this before I need the reminder. "You have changed my heart's desire. My desire's are mercifully upended and withered.

"Keep chewing on faith! And you are most attractive when you speak with your mouth full of fig and seeds stuck between your teeth." He's laughing outright.

HE IS RISEN FOREVER!