Guess What I Found in my Closet?

It's not natural. Not based on how things are going, or not going, or on expectations that carry heavy consequences if not met; and I think of Mary heavy with child upon return to her hometown after spending months with her cousin Elizabeth.

Mary wasn't the only one heavy. I imagine the heavy hearts of her parents. The heavy faces looking at her, heavy with accusation. The heaviness in Joseph's heart making his steps heavy and heavier still because he knew the consequences, heavy as stones and dishonorable death in the streets she grew up in. Did he ask God for supernatural deliverance from the law that was killing his heart? I imagine he did, because God gave it to him in a dream.

I suppose Mary could have lied to save her life. Could have said she was accosted by a Roman soldier. Could have used a lie to manipulate into the natural realm a truth that was unnatural. It wouldn't have been the first time the truth has been lied about in order to save oneself by giving others what they want to hear. But she didn't.

Was it because she had a greater hope? A hope that she was willing to die for? A hope that she was willing to be disgraced for uttering out loud and true? A hope that denied the expected, denied the natural, and dashed the hopes of others who couldn't believe the very evidence of her extended belly and couldn't hear the confirmation in her words, of the word of God? He told them in prophecy that this would happen; "Behold, the virgin  shall conceive and bear a Son, and shall call His name Immanuel" (Isaiah 7:14).

"An angel told me the Holy Spirit would come upon me and I am carrying the Son of God, and His name will be called Immanuel," was the explanation. I don't know her exact words, but I'm sure it went something like that.

Why didn't they believe her; those who knew her character best? Why didn't they hear the prophetic words of hope from ages past in the words she spoke? Why couldn't they put it together? Was it because hope is supernatural and holds it's own under the heaviest weights ever known or yet to be known? Isn't lesser hope unworthy to be called true hope? Wouldn't it just be called a reasonably expected outcome based on calculations of what is natural, normal in a logical course of events? Isn't true hope much greater than this? It is. 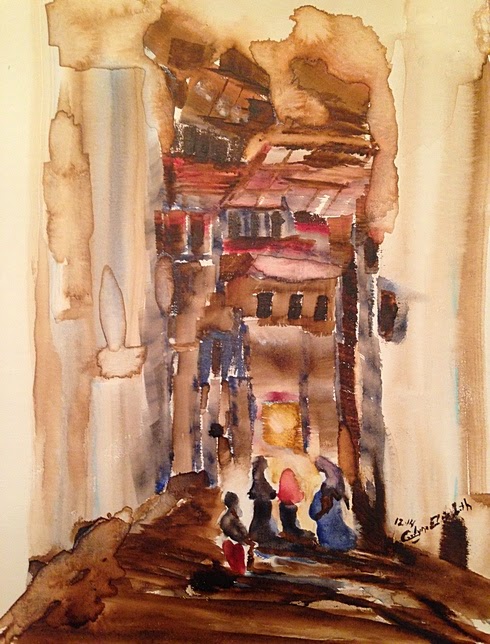 Mary Heavy with Immanuel
Mary kept many things quiet in her heart. How much is heard by those who practice this? I don't know, but I do know that my heart settles quieter when I close my mouth. I just can't ponder and pontificate at the same time. And when I believe God has just spoken something outside of nature, like "Behold, the virgin shall conceive and bear a Son, and His name shall be called 'God with Us,'" I keep it quiet in my heart for as many months/years as is needed till the wisdom of God is magnified in me and I'm large enough to speak it with discretion.

I've learned something about the wisdom of God: it's foolishness to the natural world, and the natural will collide against it just hard as hail stones and cold as ice, so I need to spend a long while in the supernatural. Let the natural collide as it will; it can't touch the supernatural happening inside where soul is as womb and heart is faithful and blood is life.

Mary left town before she showed and gained faith on faith, hope on hope because Elizabeth was carrying John the Baptist, the presenter of the Truth, the Way and the Life, in a womb too old.

I don't leave town, but I leave the room and go to my closet. Sometimes a real closet, and these days I go there thanking Him for faith gift real as the gifts I kneel in the middle of. They are waiting till Christmas morning.

I'm excited to place each gift into each hand. I'll glow inside soft and warm because gift, light of the world, glowed holy inside Mary's soft and warm, was given into the palm-up hold of my heart, and I know God is excited to give faith on faith, hope on hope to me right now in the hours in this closet where gifts wait.

Hours of anxiety during the night. An inner rampage that emerged from I don't know where in the lateness. But I've done this before and, yeah, I've been fear swamped and this vessel's gone down ship wrecked, but not anymore. Not anymore, because I've spent a long while quietly gathering God's heart like oxygen into mine and now I breathe His first prophecied name, "Immanuel. God with us. With me."

I breathed His name in the night. Four count inhale, "Im-man-u-el," and four count exhale, "God is with me."  And guess what? I am quiet. I slept. I am in the closet early, surrounded by gifts.

From upstairs I hear what the voice of glow sounds like. It says, "Mom!" and sounds all happy. That's what glow sounds like to my ears this morning. "Mom!", because this young woman who is my daughter is still little girl excited to shout melodramatic glow from the top of the stairs, "Guess what! Guess what I found in the deep recesses of my closet?" Yeah, that's exactly how she said it.

"What?" I shout from the depths of my closet where I'm finding things, too. I glow now, "Thank you," to the God who is with me and I wait to hear what she found.

"My black boots! And they don't even smell anymore!" Her laughter slides happy down the banister.

I laugh in my closet. I laugh because isn't faith just so delightfully real? Boots! And they don't smell anymore! It's laughable and I hug the moment.

They smelled. They did! But who wouldn't smell after walking the endless blocks in a New York City winter that's melted on the sidewalks and soaked everything but rubber?  And, no. No. Rubber was not on her fashionable feet. 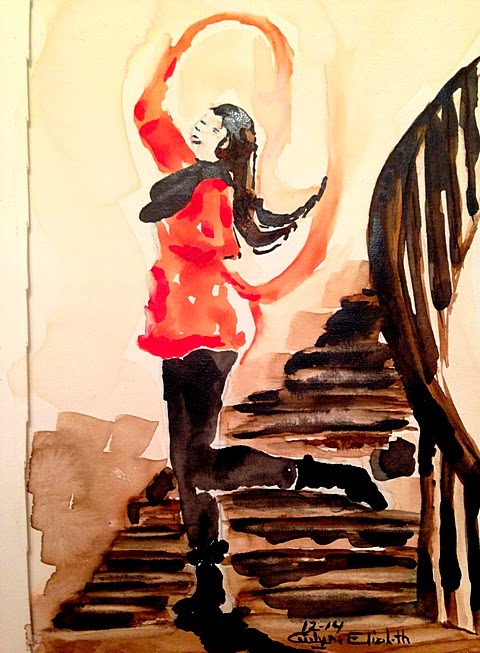 I go to her and we meet at the stairs, grinning because we know the whole story. She points her booted foot straight out, "I guess they needed a year to dry out so that they don't smell anymore!" She celebrates it out and models her melon-hued loose-knit sweater with a black knit infinity scarf on top, black jeans on bottom with, of course, the black boots that walked New York City blocks.

"Smashing!" I shake my head as she twirls all fashion.

She glows out the front door, if that's possible. It is for her.

I guess they needed a year, I think over her words because they stuck. I guess I need time, too, I ponder quiet because there are many things I keep quiet in my heart.

I've still got "boots" in my closet. Things that kind of smell, still, because shame is dank and I've shoved dank into the far back recesses. The thing is, boots that smell like shame don't dry out till they're placed in the light.

Well, when I catch a whiff of damp boot I don't shove it further back as I used to, because doesn't Immanuel know about smelly boots and stinky feet and city blocks, suburban sidewalks and every other walk in life? And isn't His presence known by those who actually wash His feet with grateful tears of glow because hope has been fulfilled and He has washed the stench of shame away and dried in His light, boots, soaked till all that offended is redeemed?

Who hasn't walked where life has just melted like a puddle on a city sidewalk and soaked in smell? Yet, what things dank did fill His baby nostrils from first breath? Everything that fills dark stables that remain damp long after precipitation and perspiration. His name is Immanuel? Praise God, it is!

I'm saying something like what I imagine Mary said, only I say it as a prophecy fulfilled; "The Holy Spirit is upon me and I am carrying the Son of God, the Savior of the world and of me, within."

Smelly boots? Shame? Anxiety? Stench of all that's melted and soaked too damp to ever loose the odor?

My daughter just glowed out the door in redeemed boots and I'm ready to start wrapping the gifts on my closet floor because Immanuel is wrapped all around me.

His presence is my present.