Getting from Here to There on Grace

I held a snail. She glided slow across morning and left shiney goo on the glass door. Not that the glass was fresh cleaned. No. I don't know how long its been since I've held Windex spray bottle in hand, but still. Snail goo?

Gentle pry. The trespasser hangs out the front door of her spiral shell  home, and my finger becomes like porch for her to sit upon.  It's marvelous beauty just so quiet and unassuming. Graceful, too. She moves delicate silent and stretches out long and side to side, and her antenae elongate and shrink for reasons I cannot know.

Goo is on finger just soft glaze and shine and Ms. Snail never really touches the soil of this earth, but glides across it on what? I'm calling it, "grace." She glides across this earth that she lives in without touching it. She's touched by it, is right now, by me. But  somehow she glisses right filmy above filthy and right gooy above gritty.

I hold her at eye level and say, "Thank You" to her Creator, God. "Thank You for this, this," I can't find words. I just think things like "humble" and "slime" and put them together. "Yes.  Thank You for this sublime," because isn't humble often "sub?"

Then more words of gratitude come, and I lift them like prayer picture because they are a picture of thanksgiving this morning.

"Thank You for the rare," because it's rare to me, how I'm seeing grace this morning. It's grace just raw and organic.

"Thank You for the remarkable," because it's remarkable to see grace like this; grace just simple and humble snail.

Is it possible? Possible to see grace in a snail? To see in the likes of a snail, the real felt "I will do it," grace that God says to those of us who really feel our needy state before Him? It is possible if we make it soul habit out of soul need to find every trace of grace possible. And the traces are everywhere. Even in snail. Found out in the way she moves through this world.

It's need for me, this grace that God gives, to live and move and have my being in Him as I trek earth sod. It's so much more than the official but perhaps a bit over used, pat and, may I say, stale defination, "Undeserved favor." Grace is that, but I have to begin with goo to even know what "undeserved favor" means for real.

"Thank You for the captivating." It's not that I'm captivated by a snail. I'm not. It's that this morning I'm holding still on purpose. Purposing to take thoughts captive and reign in the rush, and a snail has been provided. I'm captivated by grace, for grace, and if God provides me with a snail for it, then, "Thank You, God, that I didn't miss it."

It's all word picture of grace to me. Something of what grace looks like, and I'm filled with thanks giving to see it. To see what it looks like to be in this world, but not of it.

I want my treck through this world to be snail goo, in a manner of speaking. For this grace to transport me and mark like snail goo just gentle and silvery when the Light of the World shines upon the tracks I make, the ways I've gone, even today. And may this grace be seen by grace-seekers who, should they follow the mark I make, be led to Jesus at every turn.

I've left more wreckage in my youth-strong path than I want and now I want nothing more than to leave this gentle touch that shines because I'm moved from here to there on grace. May my feet leave just gentle, humble, transparent and true as goo, whisper. 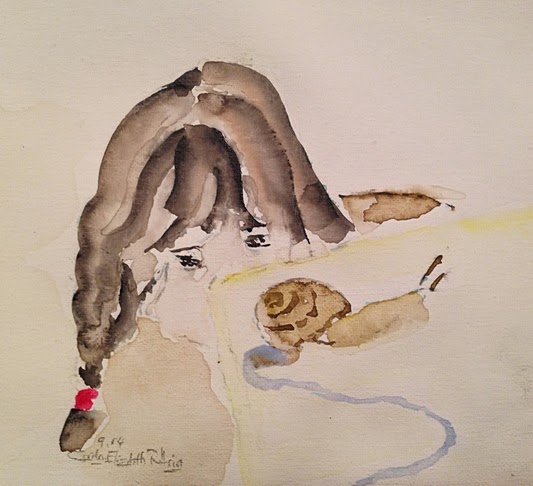 "She's doing yoga," I bemuse myself and, no doubt amuse the eve's-dropping Creator. "Look!" I say to Him. "She's twisting and reaching high and extending out till she touches her foot!"

"Look at her shell," says my eves-dropping Lord. He understands my delight. It's worship. And worship is grace transport through this world. It's a steady slow snail Sabbath appreciation of God's work. And He gives me yet another look into Sabbath. A grace look into this rest that takes time to enter. To do. To practice and learn because it's worth it.

Isn't God worthy of the time and trained focus to enter Sabbath rest because He does? He gives me snail to lead me there today. And so I watch this snail and look at her shell because God created her with what she needs to built it and He housed her and, "It's beautiful, God! Just beautiful!"

I'm curious about snail shells. Does the snail just find an old shell and move in? Or does she build her shell? I google it, and snails build their shells with the cellophane-thin film they are born with. Before they are hatched, they are given what they need for life. And they nourish themselves with calcium to build strong shells to live in. Hmm. "You covered me in my mother's womb," is Psalm one-hundred thirty-nine word that comes to mind.

"I covered you with grace before you were born," I hear Him whisper silvery to me.

It's whole, the shell. It's filled with graceful life. It's not like the cracked empty pecan shell I held two days ago, darkened with age and cracked weathered and broken. Must have fallen last season around this time and lain forgotten on hard ground till buried beneath life that also just fell in heaps on top of it till it became empty. Just empty.

I know what that felt like last season. It happened like that to me, which is why I picked this shell up and held it. I know the emptying and the empty and the "Now what?" question when I knew God held me a little like I held this empty pecan shell. And when, "Now what?" was just answered with His silence because it had to be that way.

Sometimes He is silent, not because I've moved far from Him. I was in His hand then, as I am now, and He was just silent and He let life fall like dead leaves in heaps upon me. But it was season for empty. Season for becoming empty; for feeling the shrivel and, yet somehow, also for knowing God presence silent, but with me, inside.

And so I related to this empty I held in hand two days ago. And, "Thank You" formed even then on soul because flesh gave way to it. And isn't this it? Doesn't flesh have to shrivel until human shell is empty of it like this pecan shell empty of it's own meat in order to say, "Thank You"? Sometimes the Sabbath is soul long. Measured by the setting and rising of soul sun. And soul days measure differently than flesh days. 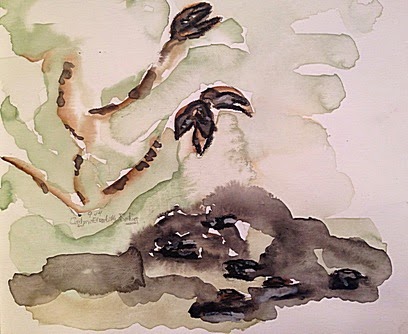 Empty Pecan Shells
But this morning season the sun is rising on my soul. I see a bit  of what it looks like in the slow, and I think my soul relates to a snail's pace more now than ever before in my life. Is it because more than ever before in my life I'm nurturing love for God? Nurturing the grace He covered me in? Is it because what's taken the bravest death to self has become what's life altering practice? If so, then what else is there to do but to make every minute all about nurturing love for Him who gives grace for it?

There is nothing else. Just try turning elsewhere and feel soul shrivel while flesh gains. I refuse. I choose. Because nothing is more terrifying than soul shrivel. And perhaps this is part of Sabbath, too. Perhaps part of it is to refuse soul shrivel, and to command flesh to lie still on the ground for a long season while life just falls in heaps atop. I'm just sure it is. It must be, because to refuse to practice Sabbath, and it is practice, is to let flesh run in the fast lane. And that is deadly. It is. People crash in the fast lane. And God Himself says that much. Live fast lane and flesh life too speedy relentless for Sabbath rest, and die. I think He said it in Exodus not long after giving the Ten Commandments. But live Sabbath practice; and practice and practice till it becomes easier and changes the way life happens the rest of the days of the week. And live. Live! Just glorious and beauty seeking and love nurturing and grace finding, full and slow and alive life! I want this. I practice.

There's this snail and silver gloss goo, and slow, this morning on transparent door. And that's meaningful, too. Where it's discovered. Because God doesn't skip the details. We do; but God doesn't. Until one day the Sabbath practicer notices. Just notices the beautiful trail of where God has moved. And I'm looking at it right now, in a way. Right here no further than my back door.

In the most reverent, God-honoring speech, "God, if I'm like this snail," it's sublime humble to say it so, then I learned it from You. May I say it like this, God?"

"My life moves in you, reaches out of you, and is the grace between you and the world you are in. Yes. You may say it like that to Me."

I'm holding the truth of it all right here. Gift. "Thank You." I worship, give thanks, in the slow. I worship in the conscious "No," to flesh that always wants to run. But, "No!"

Because I am holding a snail.