Sometimes There’s Just a Snake in the Garden

Sometimes there’s mayhem.
Sometimes my world splits open and rattles my bones and ghosts from the past rise up.

And sometimes there’s just a snake in the garden.

There was snake this morning. Not the nice garden snake, but viper so much the color of dirt that I didn’t see it ‘til silent movement slithered down corner crack in garden bed. It’s there undercover hidden and in camouflage.

Brave me wanted to take spade in hand and chop off its head, but queasy me couldn’t. I’ve seen it done before when I’ve cried, “Snake!’ and the German has beheaded a few for me with shovel. After that, the garage was all man cave as far as I was concerned.

But this snake. Spade size. I just stood there with the tomatoes and watched it go down by the zucchinis.

“There’s a snake in the garden.” Where have I heard that before? I know exactly where. It’s in Genesis. Eden birthplace. Earthen womb where Father hands reached in and pulled out. Man.. Where intents and thoughts of heart and head were part of the same cord inwoven by Spirit.
I’m not a great warrior. The only reason for victory is that God is my great warrior. He’s already dealt with the serpent Satan. But I‘m still living on this earthen ground in this dusty body and I still see snakes. See the forked tongue sensing my presence. Here the hiss. It sounds like the “s-s-s-p,s-s-s-p” scraping together in gloved hands leaves and dirt and thorny canes and dried mud balls. I capture them in hand and dump them in leaf bag for recycling pick up. In suburbia we can’t just burn it. We have to handle it. Scoop it up. Bag it and drag it to alley. 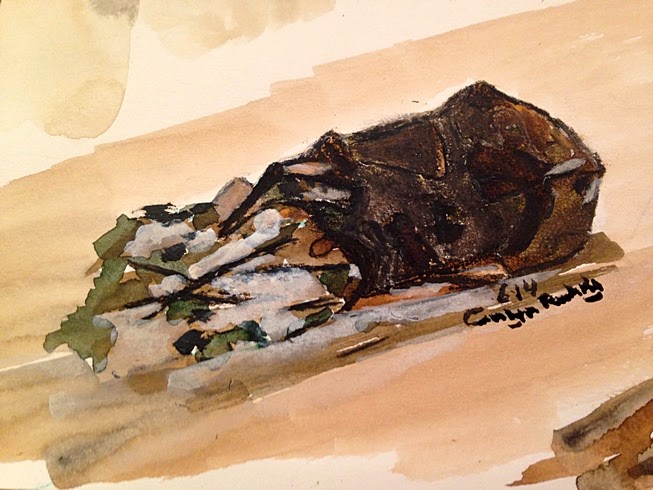 
I’m practicing being mindful of what’s in my mind. Thoughtful toward my thoughts.

I’m learning. Scraping it together handful by handful. Oddly, the snake motivated me because if I can’t behead the snake, I can behead a thought or two before they slither down into some cranial crack and blend in camouflaged and coiled to strike. Yeah, I’m motivated.

How do they, the leaf bag makers, envision the likes of me opening the bag? My arms aren’t long enough to reach inside and slap the brown paper sides open. I could lie down and crawl inside. No. I decide to wear the bag. I pull it over my head like a dress ‘til it skirts around knees, reach straight up and wave my arms around inside the bag. I do this behind a tree. Privately. Because, truthfully, I’ve never seen a neighbor open a leaf bag and I don’t want to be seen opening one 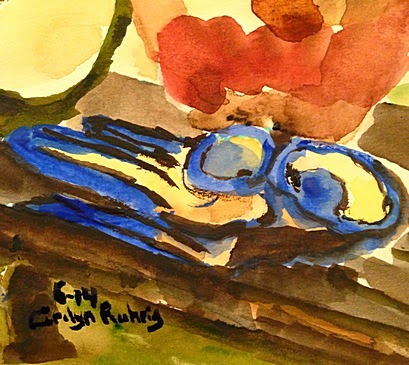 Garden Glove
“I’m trying.” I whisper back all sweaty and hot and I don’t care that there’s dirt on my glove when I swipe tear.

“Think on whatever things are true,” He starts and I join in by heart, “whatever things are noble, just, pure,” our voices whisper together, “lovely, of good report, if there is any virtue and if there is anything praiseworthy-meditate on these things” (Philippians 4:8).
If I see that snake again, I might just grab spade and toss the silenced hiss in the bag. Maybe I’ll string it up to dry first. All I can say is, there’s power in this three-stranded cord, ‘cause this woman is cutting off snake heads and silencing hiss in her own head; and scraping up “s-s-s-p” thoughts and is marked tan by fire in the sky and refined beneath it, too. So that on delivery Day, when I push through Heaven’s gate into new life, literally, it will not be like passing through fire, but flicker.

That’s the grace I pray for as I try live it out in a million little ways.