A comment made, a question asked, a tone interpreted, a misunderstanding or maybe not, I'm reminded of a past offense, and I feel the sting of tears and the bite of fear. “God, I thought I buried this all a long time ago,” I say as I wave my garden spade at Him.
I stand outside weeding among dry stalks fading in fall yellow.
A web is tangled in the stalks. I look at it clinging to what is dead and should be buried, but isn’t., and I feel how it looks-tangled tenacity, a wild weave.
I'm hanging tightly to life familiar; or maybe I'm caught in it. Sometimes life is sticky like that.
I understand the suffering in the web. I don’t know why troubles stick so hard; contention without, fears within, and crippling memories still cripple. 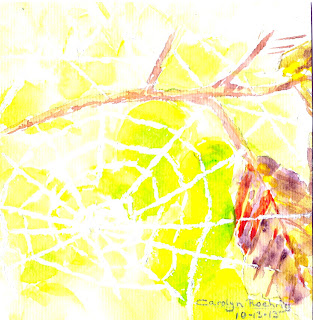 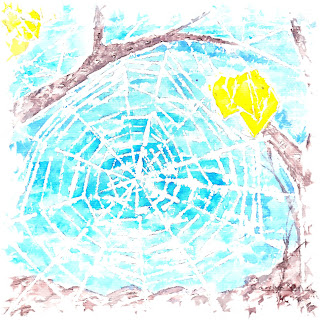 What is this web?
It clings to rambunctious disorder.
It clings to weedy, stalky life just twisted around itself in the wild and I feel the offense.
The web, it catches what stings and I'd like to sever it with my spade, wad it up, and bury it deep with the same spade that I waved at God. I would, except right at this moment I can't.
I can't, because how can I when sunshine catches the web in a cling of light? I see it happen. the strand the color of air. I see sunlight run up and down a thread of web the color of air like the spider that wove it. Sunlight spins on the web like that and I watch till I see what I didn’t know I was looking for.
Faith.
Faith. That's what I'm looking for; and I know it when I see it.
The web, it catches the sunlight, too. And I hear God say something like, “This is what faith looks like." 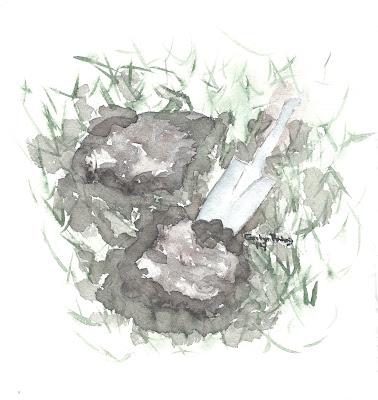 I drop my spade to the ground.
I don’t want the weapon anymore, and I don’t want to bury anything.
I want to see more faith, to capture that run of glinting light, to wrap the faith web around that light and drink it in—to just drink light.
The strands of the web are invisible except where the sun runs a slender finger over the strands and points them out. Faith is like that. It goes unnoticed until God points it out.
Faith.
Faith is a webby substance tested by sorrows. I don’t like it, but I know it must be this way.
I see it this way right in front of me.
Gold glint of light on gossamer strands shows me that faith is there.
It's substance.
Light drapes the jasmine vine which grows along my patio wall. The jasmine drapes flower and fragrance over patio brick.
Light cannot be touched, except by the soul. That's where I feel it real, and I'm certain my soul has fingers.
Surely the Holy Ghost-Spirit of Light-drapes white fragrance.
Surely His threads are gold as morning sunshine and may they drape me till I'm wrapped.
Doesn't the holy tangle with life and death just as surely as web is both lifeline and death row?
“You are lifeline and Redeemer for those on death row,” I say in wonder and truth and marvel.
I’ve been caught in webs before, just stuck in the sticky and unable to disentangle. Webs are too strong for me, but not too strong for light. Light conquers the web. And more. Light uses web to conduct more light-mercy of mercies!
It's been discovered that spider silk can not only propagate light but can also direct light.
I'ts been discovered that spider silk can carry light into the body for medical imaging. I have no idea how that works, but when I read it I felt as if I’d just uncovered one of God’s secrets tucked away in His creation.
I could have said, “Conquer the web!” and knocked it down with my spade. But if I did that, I would have messed with the Light which uses what tangles me up to shine into my soul.
Similar to medical imaging, the Light is the healer too, and web to a healed soul is a lifeline, not death row. 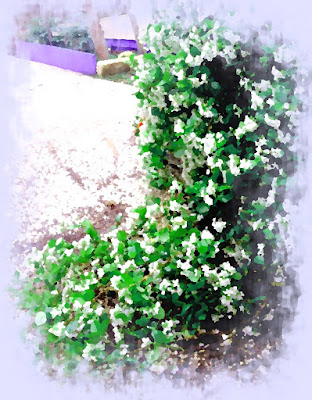 I Google “web.” How strong is it?
I read that spider silk is five times as strong as steel and that if a single strand of web breaks, the strength of the web actually increases. Also, web stretches 30 percent longer than its spun length without breaking. It vibrates an unheard frequency when an insect flies into it, and the alliterating poet in me thinks-a suffering struggle strums strands, resulting in strange hum in stretch.
I need tangible evidence to help me to believe. To trust.
Isn’t this what faith means?
Doesn't it mean death and resurrection evidence of hope for salvation?
Ark evidence of hope for deliverance?
Tent evidence of hope for a heavenly country?
Sacrificial evidence to gain testimony? To endure?
A lifetime of things hoped for?
Don’t trials show that faith is there just as surely as God points it out in a hallelujah glimmer?
May I look for faith everyday!
It will be found.