Truth is that I can’t always control what life digs up for me-but I don't have to chew on it, because there's another truth-God is in control.

Truth is, life can't just dig up stuff and hand me a rotten strip of rawhide. My dog does that! 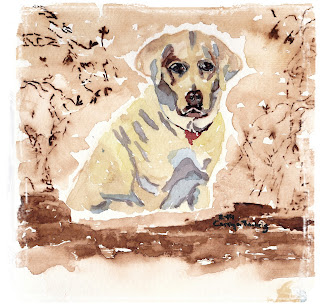 Truth is, sometimes the ground seems to open wide as if to swallow me whole, and sometimes a day feels like a sieve with holes in it and, yeah, sometimes my heart bleeds with every beat, “Prove Yourself to be in control!”

Thing is, He has.

I don't always see it that way, but that's why I set out in search of the evidence I need to never lose hope. It's there, faith for hope. I just have to look for it, but it is there because I need it and God knows I need it.

Didn't He create me to need the faith He gives? To believe the truth which is, no matter what looks like a rotten strip of rawhide dangling from my dog's mouth? He did.

Doesn't He have the whole world in His hands, as the children's song goes? My whole world, too? He does.

And wasn't everything God created done out of His own faithfulness-because He is the Faithful One-and for the sake of His faithfulness? Yeah, He did.

God has proved Himself to be in control and proves it every day.

"Amen!" my spirit cheers what the truth is.

I was in control," He starts rolling up His sleeves, "when I kicked hell’s gate open and blasted dragon fire and took the keys and I was in control an eternity before any of that even happened."

So why do I reach for the Gorilla Glue when it looks to me as if someone's got to do something quick before the crisis hits?

I've been there, glue bottle in hand, asking the questions the unglued ask about themselves when they're not sure who they are these days. Or what they're supposed to be doing. Or the, "I've lost track of me, somehow;" and they mean "Where are You, God?" I've been like them.

Sometimes the questions aren’t voiced because there are no words. But they are felt to the core. They burn and tears don’t quench them. And more questions arise. “Who are You anyway, God? And just what do You think You’re doing?” They ignite hot flames because it seems that the powers and principalities that He created are ripping from His hand what He put together, and the things that I would like to keep invisible are gorilla ugly.

Sometimes the identity crisis in the middle of loss feels true enough to need the glue but, "God, why am I reaching for the Gorilla Glue when the only glue is Your love? 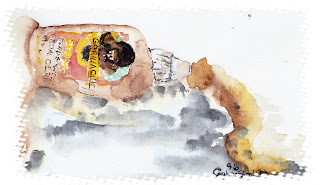 Jesus wasn't glued to the cross, but nailed.
The nail holes remain in Christ’s hands and feet; and He holds all things in His hands. Nothing sifts through the holes in His hands, and those holes were put there by the very powers He created.

No, I don’t understand.

“No!” I shout, more for myself than for Him. “No! I don’t want nails! I don’t want holes in me. Not in me. Not in my husband. Where’s the Gorilla Glue?”
"I am the God of hope." He speaks truth. "I fill you with all joy and peace in believing, that you may abound in hope by the power of the Holy Spirit” Christ didn’t need the nails but I do.

"You took them for me," He is in control and I'm in awe of that.
I drop the glue bottle and take His holy wounded hand in mine. It’s a strange glory.

written by: Carolyn-Elizabeth Roehrig
(adapted from my book, PISTEUO! Connecting with God's Heart)