A Day of Rest Supports the Rest of Life

I haven't fallen through the slats yet, though every year they turn more grey, more weathered, and weaker. Spring rains soak the slats and they soften. Summer sun dries them till they shrink and the corners of the slats look like kindling singed white in a fire pit.

Stones step across the weedy spring lawn from the patio to the bench. After a winter in socks and boots, the souls of my feet are tender on the stepping stones. Gingerly, I progress to the bench. I sweep the stepping stones with my feet, one step at a time, to clear away twigs and pecan shells left from fall when the squirrels diligently foraged the nuts. The backyard is covered in hulls, as if the squirrels had nut splitting and hull spitting contests from the highest branches last fall.

This bench, it leans against the base of the tree as if it would fall over without the support, but too stubborn to admit it. I saw it at a yard sale a decade ago, and the slats sagged even then. I have a soft spot for the poor and needy, and this bench was that.

I gave a few bucks to the woman in the bright sari. We carried this old bench to the van like two caretakers at a nursing home might ease an ornery gentleman into his bed when he insists he'd rather stay in the courtyard all night, but secretly enjoys the attention. To me, this bench is like that; bad-tempered in a crusty-till-cracked-open way.

I drove home with the bench in the back. It's retired beneath the ancient pecan tree. I know the two of them lean on one another too stubborn to admit they need each other, and too united against the crazy squirrels who are what they eat: hard-headed, half-cracked nuts.

Lord willing, I'll spend three more seasons on this bench. It's where I like to spend warm mornings. The fourth season, winter, is too cold for the likes of me, but isn't winter also a season of rest? It is in my backyard.

In the winter months, the lawn rests beneath decaying leaves, and sometimes a thin blanket of snow. The trees rest till their sap slumbers thick. The vegetables in the garden rest permanently, and I pull them up.

A day of rest supports the rest of life. 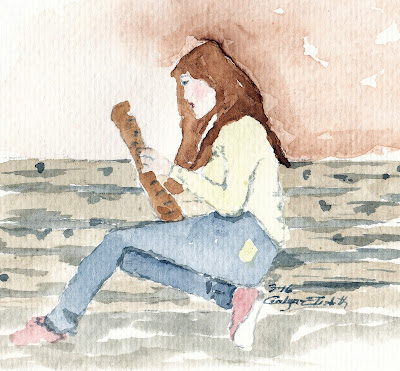 I lean the back of my head against the rough bark, and the sun leans against my face.

"Moses was promised water from a rock, not after beating his head against it as this woodpecker, but after a single strike with his rod." The Lord speaks to me over the woodpecker with a jack-hammer for a beak.

"Jesus!" I recognize the voice of His Spirit. "You are the rock!"

Surely, I can relate to this crazy woodpecker beating its head against an empty metal rain gutter, as if it thinks it it's not a wood pecker but a metal pecker. Sometimes I confuse my name-my purpose- like that and I end up with a colossal headache. That's just what happens when I beat my head against a wall-when I drill my will.

I find moments of clarity on this aged bench. Here I rest on ancient slats, and here I listen to the Ancient of Days, "Come to Me, and rest."

"You mean, just come to You and sit on Your lap as I sit on this bench?" I know this is what He means. He wants me to rest where I can hear His heart against my ear, not the hard echo of my drilling will.

"Come to Me, and I will give you rest," He says it again.

I lean my head against the song that His heart drums.

Only the woodpecker rattles harsh.

Squirrels cracked hard shells last fall, and the yard is littered like confetti after mardi gras, but at least they ate the nuts.

May I break bread on this bench and maybe even toss  bits of hard outer crust into the yard in jubilee, keeping joyous honor of communing with the Bread? I may. I will.

It looks messy, breaking bread. Crumbs fall as bits of confession. Yet, maybe the Bread of Life is beneath the crust, the skin, the outer rough.

May I  live as I am named; not as a woodpecker pecking metal, but as a Christian knocking on the door of Jesus' heart.

His heart is already open, so the knock is more like a gentle, "I'm here," tap.

"Come and rest," He invites.

Tomorrow morning I'm going to bring a baguette with a hard crust.