Hot wind burned the panting ground, stabbed as pitchfork and plowed like the new-fangled John Deere tractors that rode over depleted topsoil till it had nothing left to give but to give itself up all "dusty ol' dust," as the 1930's saying went, till dust rose and roiled and rolled over itself with the momentum and power of a rogue wave at sea that mounts upward of several thousand feet and then sprays higher.

This dust didn't float; it lumbered. It didn't catch the sunlight; it grabbed the sun in a black fist and ripped light right out of the sky. It wasn't smudge, but indelible blot on the flesh fabric of those who woke in the mornings and saw the silhouette of their heads on the pillow case, the only thing not blanketed in dust that fell though the night.

Documentaries of the Dust Bowl record the dust appearing as a cloud ten-thousand feet high. "Nobody knew what to call it. It was thick like course animal hair; it was alive."


Dust. Just sand and dirt ground up like powder till it became strange black ranges of mountains that grew and moved in the wind because none of them were rock, but dust.


I catch dust and cat hair in the feathers of my duster and I sweep it from the keyboard. 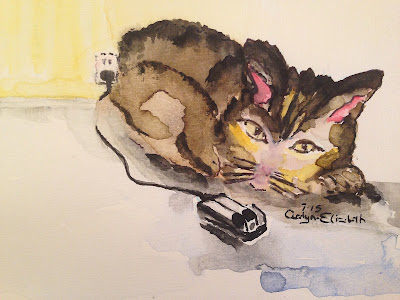 
Some say it was the wrath of God. I wonder. What if there wasn't the greed and lust for more? What if we were content, thankful even, for what we have? What if we didn't eat through, chew up, strip down what we have until it's all used up and we move on westward because "There's gold in them thar hills," and there's a rush on land as virgin as what we just raped and left wallowing in dust? Maybe there wouldn't have been the Dust Bowl, the Great Crash, and the Great Depression.


I've done things like that before. Youth tends to. Young people, young nations and maybe it's because the lust of the eyes and the pride of life scream against this truth that's stood rock solid through all the ages and nations; "Foolishness is tangled up in the heart of a youth" (Proverbs 22:15). And maybe worse than the blind leading the blind are the foolish leading the foolish because a blind heart can learn from past stumbles and warn others, but foolishness is insanity.


What if we reasoned from the perspective the cross gives? Wasn't God's wrath satisfied there? And how much clearer could He have demonstrated the truth that His good plans for us have everything to do with Him, and that we merely benefit, because He is good.

Many are just stripped by blast after gust. Some turn their backs on God while others manage a scratchy "thank You" in, not for, in it.


The raspy "thank you" comes from the tried and true saint; from the likes of Stephen who counted the praise that God will have, for He will, worth every stone hurled at him. And it came from Jesus, Savior of every saint, when He spoke the sacrificial "thank You" at Eucharist table.


"How?" I wonder. "How do people praise You when all that is as stone flies right at them? How do they thank You when dust is falling from their sky, or when the literal sky itself seems to be falling like a ceiling crumbling and there's pain and even death? Just how?" 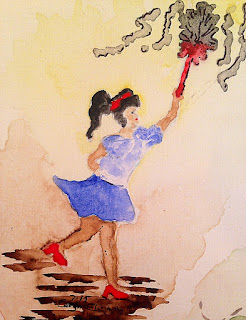 Feather Dusting
I'm listening to myself; and to God whose saying, "Ok hon, 'nough with the 'we/they' language."

It's impossible to hide behind I.


So, will I thank Him when I don't understand what He's doing?

Will I praise Him though my sky looks to be falling and I'm crawling on my knees to Him for shelter?

Will I sacrifice the hard praise? The labored thanksgiving? The, "I trust what You're doing more than I trust what I want" and "I will accept even this as from Your sovereign goodness"?

Isn't this where humility begins? With just one breathed "Thank You" and an unapologetic, "Everything is primarily about the praise You will have"?

Sacrifice like this and there's no more, "Surely this isn't from God" excuse as if some things are beyond His good reign.

I'm thinking about these things. Seems to me the praise and thanksgiving offered when God's come through in ways that I understand, and answered my prayers the way I want Him to is a beautiful praise, but it costs me nothing. Seems to me this isn't half as beautiful as the sacrifice of praise.


"I choose to praise You whether the ground is firm beneath my feet or is oddly mounting in the sky and raining dust that I'll need more than a feather duster for." I say it like this to God.

"Bring Me your heart." He wants my heart. Maybe He wants it because I'm being refined, threshed, pressed, and isn't silver dross, wheat chaff, or dry mesocarp basically dust? And isn't dust itself evidence of the power of purification? Evidence of pure silver? Pure wheat? Redemption, dustless and eternal?


It's a strange goodness that nailed the sovereign Savior to the cross, yet gave Satan power as prince of darkness. Yet, God is King of heaven and earth and all that is in it. King. Not prince. And He is omnipotent over all. All. As in just flippin' and spinnin' all.


Well, He wants my heart. Maybe He wants it because it pumps life blood and strength into this bit of flesh and because soul life and soul strength and the purpose of heart, soul, and strength is for loving Him.


"Do You see the dust clogging up my heart, soul and strength? It's just falling off of me!" I ask Him knowing that He does, but unsure of what it's going to cost me to give Him my heart like this. 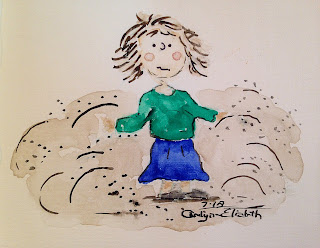 
"I made all things to praise Me." He's all about His praise, and some wise saint once said, "I'm most satisfied when God is most glorified." It's true. I don't know how it works, but it's true.


I remember God saying that the rocks themselves will praise Him. No wonder. Jesus is the Rock; and maybe the earth itself sometimes peels back and rises up as course black dust because when the people don't offer sacrifices of praise to the Rock, the rocks will sacrifice for it and the people will feel it. I

It was felt in the 1930'and is felt today. Perhaps it'll be felt for as long as earth keeps spinning because dust is the fallout of refinement but praise and thanksgiving are most beautiful when given from a dusty broken spirit and a contrite heart. God seems to prefer the prayer shed from a spirit that chooses to thank Him in life's pain and to praise Him in dust storms over a "Good job, God," pat on the back,

"Make my heart to praise You, Lord." It's courageous prayer for me. I know what I'm saying. I've said it before, but I guess I need to repeat it when I'm shedding dust like Pig-Pen in Charlie Brown.


I wave the feather duster, "Make my heart to praise You!"