Oatmeal simmers hot over low flame. Chipotle chicken sandwich leans against the water bottle in the brown paper lunch sack just waiting to be stuffed into the worn out backpack, slung over the shoulder of this third-year high school daughter, and she and her backpack have senior-ites a year early.

I turn and yank open the tight-lipped dishwasher door while she runs late, and I think over yesterday's conversation with one not so laid back. She runs like a punctual ostrich and runs wound tight. Sweet and striving. Too afraid to soar like an eagle; too controlling to let the wind carry her. She's like a bird that cannot fly. Ostrich-like.

She runs. And when she can't run anymore, she "buries her head in the sand." Come to find out, ostriches don't bury their heads in the sand but press their long necks to the ground. They feel invisible like this and I wonder if sand grits because isn't that what it feels like when our insides swish and steam builds behind lips sealed like rubber lining on a dishwasher door and we just want to hide?

And she did. Pressed her neck to the pillow and is still there like that this morning; and I long for her to stop running and gritting. To stop manipulating her direction, kicking like an ostrich, pressing and gritting.

Confession, I think to myself,  is like dishwasher detergent.

"I want to go back to yesterday's conversation with her," I confess to the One who made eagles and ostriches, "and unload truest clean words." I'm unloading drinking glasses from the top rack of the dishwasher. "I'd fill my lips with thirst quenching words and offer them to this thirsty runner with grit between her teeth." I place glassware in kitchen cupboard.

"How often do you yank the dishwasher door open?" He asks me as I'm ready to close it.

"Sometimes the thirsty own lips like the rubber seal edging the dishwasher door; watertight however," He's always  just a "however" away from hope and His next words overlap mine, "confession is like dishwasher detergent."

"I confess, Lord." I choose to leave the dishwasher door open a crack. "I didn't speak about You in the way a friend speaks about her best friend. You are my best friend." 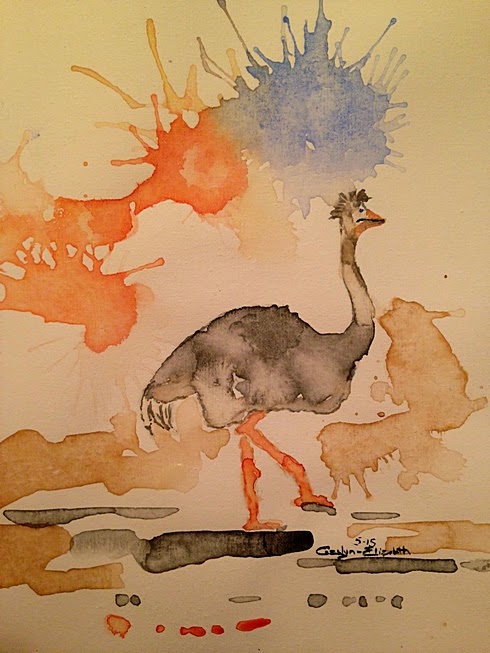 Ostrich
The high-school junior with senior-ites slung over her shoulder, shoes tucked under arm, a bowl of breakfast in one hand, and a glass of water in the other, is ready. She swallows water so free and easy. She's late, yeah, but she soars like an eagle.

She ties her shoes and eats breakfast as if there were no clocks measuring out time and no such thing as tardiness. She drinks last swallow before closing the car door with her hip, shifts the backpack and yanks open heavy high-school doors.

I pull away and continue my confessing words. "Sometimes fear suctions lips tight shut; and mine were. " I break at the intersection. "I feared mentioning Your name yesterday when the conversation pressed gritty."

Yesterday's conversation. So many things I could have said, but my lips were sealed and she was prone on her pillow a little ostrich-like. I checked on her at bedtime last night. I wanted to speak. Wanted to quench her thirst. But she wanted to be invisible and her bed may as well have been a desert of sand grit, her pillow a suffocating dune.

"I love you." Maybe the words quenched a little, and maybe the hug lifted her neck an inch above the dune.

I padded soft down stairs and laid my head on my own pillow. It's feather downy, not dune. It's everything flight and soar and nothing ostrich.

"How to reach her?" I sighed to the God who can give ostriches eagle's wings, who can turn deserts into oasis, and who can give streams of living water to the thirsty.

He gave me a recipe for Peace Cake.

I texted it into my iPhone.

Mix the ingredients together. Pour them into a cake pan and bake at 350 till risen and fragrant.

I texted it from my pillow to hers upstairs. "I'd serve you a big slice of it for breakfast with a fresh cup of Texas Pecan coffee with local honey."

"Thank You." He has the best recipes; and maybe Peace Cake strengthens the ostrich with courage to lift the head high. Maybe one cup of joy can give flight. Maybe Peace Cake every morning can transform an ostrich into an eagle. Maybe.

"Shake the sand from your feet." I hear Him now, and it feels kind of hard-hearted.

"It does, Lord." I confess it out loud. "It feels hard-hearted to shake the sand from my feet." I love this ostrich.

"It's hard-hearted to forsake wanna-be eagles for the sake of an ostrich." How He speaks! It takes my breath in sharp.

"Yeah but, I love this ostrich!" I flap my lips kind of too hard.

I gasp. I gasp because the conversation just took a turn. "I'm an ostrich becoming an eagle." I speak the realization slow.

I've been ostrich-like. I remember when my pillow was sand dune.

I've been a runner and kicked up sand. I remember when I pressed my neck to the mattress because I wanted to disappear, and gritted sand between my teeth.

I've tried to hide from an enemy, no, an army called fear with too many troopers to name. I remember hiding till I learned that God is the lifter of my head and my hiding place.

And I've lifted my head from the dunes and shaken the sand from my sandals.

And I've looked up from the desert dunes.


I've also been a wanna-be eagle.

Well, I did. And I know others do.

And guess what? Yeah, I'm mounting up on eagle's wings and finding other wanna-be's.

History repeats itself; only now I have a recipe to work with.

Mix until crumbly.
Bake in desert.
Look up until you can fly. 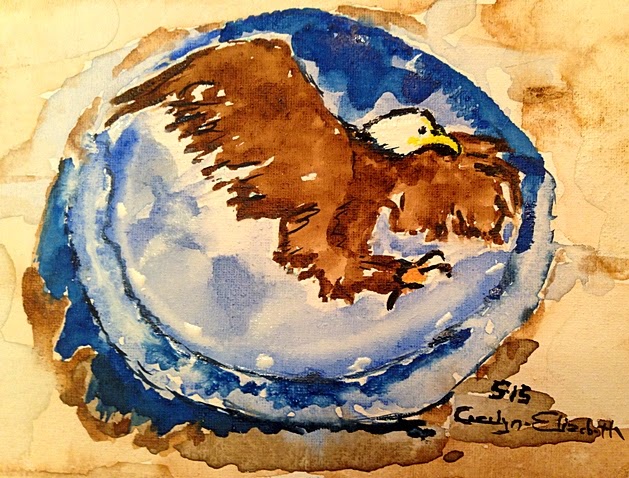 I want the healing of the gospel truth; and so do others.

I want to lift them up from the dunes and say, "Look up till you can fly!" I do; because I've packed sand like brown sugar, sifted grit like flour, rinsed soul bowls filled with mixed up thinking like mixing bowls filled with baking soda and vinegar.

Now I have a better recipe; and this ex-ostrich is swallowing the gospel in gulps so desperate that the word just overflows and dribbles down my chin. My neck.


I hear God's words to the disciples when He sent them off in Luke chapter nine, "Heal them, and they will mount up on wings like eagles."  It's a sentence and a breath beyond "shake the sand from your feet."

"Don't forsake them because you're trying to dig an ostrich out of the sand." I get what He's saying, and I laugh at the image only because maybe it wasn't so funny when the image looked like the ostrich I was and the eaglet I became just angled all odd at the neck staring at the ostrich I wanted to dig out but couldn't. Before I looked up.

The story's like this: a fascinated ostrich and an eaglet press their necks to the ground and stare at each other like that. The ostrich fears for her life; the eaglet fears for the ostrich. The ostrich sees the eaglet in an unnatural position and thinks, "How wonderful! She's staying by my side." But the eaglet is getting a kink in her short neck and cramps in her long wings, and she's thinking, "Lord, I can't leave her here but I can't stay here. I can't bear to see her run and spread those rudders she calls wings till she steers herself right back into the dunes." And the eaglet's sense of loving care is confused; manipulated by displaced duty and misplaced mercy.

He, the Maker of the ostrich and eagle, assures me, saying,  "I see the ostrich."

"I know You do." My neck is bent odd angle. It's an old habit I still haven't completely shaken.

"Get off your neck and mount up!" He commands.

Well, I received the recipe for Wanna-Be Eagle Cake somewhere between ostrich sprint and sand grit. And I offer Peace Cake now, too. I offer it, but I don't do ostrich anymore to get the cake accepted.

The recipes are for wanna-be eagles with an ostrich in their lives, and for ostriches who wanna be eagles.