I’m Not Going To Worry About Deadlines

Faint ribbon of light weaves through leaf litter and hems ridged press of pecan bark. The limb fell down to sleep on the ground sometime in the night while I slept. But there is this strand of light now looping in the press. Leaf press. Bark press.


And life itself either presses into the light or presses it out.


I stand here and awe hems up thoughts thready. “The crowd pressed the Light,” thought ravels.


And it’s uncanny how those leaves shuffling across yellowed grass resemble sandaled feet.

This strand of light. This weave of sun light that’s unraveling longer and longer the higher it rises and it walks through the press here. It’s going somewhere, but now it lingers here.


And I think of another Light pressed in another crowd. And of another weave training over ground. A threadbare hem dragging in dirt where feet trod and pressed the Word Himself because there are places to go and deadlines to meet and who notices the hem? The thread between the lines?


The woman who bled out life noticed. The outcast notice. The starving notice. The shunned notice. Those who can’t remember the last time they were touched. The threadbare souls. They notice.
And she bowed dirt low. And grimy feet walked by her face. And she touched hem of Christ. He noticed.


“Where is she?” He looked for her in the crowd. Yes, He had a deadline to meet. A father frantic worried because his daughter was dying on that line.


“I want to speak to her.” He’s always aware of where He’s going, but awake to where He is. It’s hem speech to me when I stress over deadlines.


I want Him to look for me in the press.


I want to touch threadbare hem and know that He moves deadlines because of it. It’s holy and thready and can drag out long and linger because Jesus presses light between the lines of here and there.


It’s thready. It just is. This trusting that deadlines merely sleep and Christ will wake them and move them when I’m certain they’ve passed away.


And I trip over thread. And sometimes trust unravels a stitch or two in the press. But the light presses through and weaves seeking strand on and on. 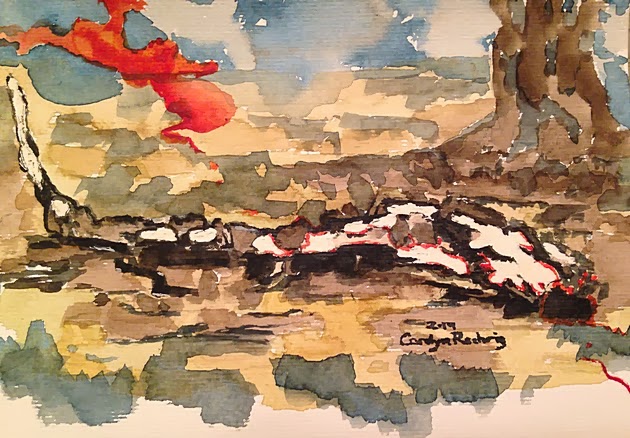 
The limb. Too large to snap off. Creaked heavy groan and cracked and echoed and fell frozen and dry and old. Would Jesus say it’s just a sleeping deadline?


It looks dead to me in this morning backyard vigil. Backyard and back soul. Where I hear vigilant whisper. That Voice. Behind me. Saying, “Turn here. Go there.”


And I’m hearing all vigilant this Vigilante Voice. Vigilante Christ. Volunteer of the Trinity. It’s what a vigilante is.


“A volunteer from an organization to punish crime when the law is inadequate” (web dictionary).


Only, He is Vigilante Grace. Because, yes! The law is inadequate!  My Vigilante broke the bread. Did it echo crack? The echo reverberates still over two-thousand years.


The branch lay on the ground. Groaned and “It is finished!” cracked mighty weight.


And Vigilante did not punish criminal soul, but became criminal sin. And saved my soul from the ultimate deadline. When others mourn He will say, “She’s just sleeping.”


It’s what I hear looking at the backyard branch. It’s been days. And it’s still not time to heave it onto the brush pile. I know it’s not because I’m still hearing, “Don’t worry about the deadline,” every time I look at it. And trust is still too bare. And I’m still tripping over thread.


It happened just now. The trip. Happened mid-thought. While pen poised over journal page and while thought formed and life just shoved into my space. By my German.


This tall German with a financial question. Does my frustration show? Brow line threads shadow I’m sure. I retrieve beat up red folder from green box and find the requested receipt.


And then I hear this Vigilante Voice saying, “Ask him if he’d like you to make a breakfast egg sandwich.”


I don’t want to. Because thoughts are cooking on the back burner.


“Would you like me to make a breakfast egg sandwich for you?” I hear myself offer.

I’m slicing bread. Heating cast iron pan. Breaking eggs open. And I recall what a friend said yesterday, “You married him for better and for worse, but not for lunch!”


"Well, this is breakfast,” I mumble beneath breath.


“Shell holding life in must be broken to let it out,” the Voice is back burner at back of mind.


I grate cheese and, “Sprinkle on some parmesan today!”


“My but You’re enthusiastic about this sandwich,” I reply.


I get it. It’s going the extra mile. Because my German likes parmesan. I fetch it from back of fridge top shelf.


“Break an egg open for yourself while you’re at it.” I sigh. Did the Voice just speak German voice to me? He doesn’t think I eat enough.


Another egg sizzles on iron. I eat standing up all dutiful. Grab my pen and race to there. To journal. Scrape thoughts together like scrambled eggs. And my pen is spatula all poised over page…and now what?


The doorbell rings urgent. Not once, but three rings trip all over themselves. It’s Fed Ex. A time sensitive package and I give it to large German hands.


And then this Vigilante, “Place your own time sensitive package in My hands.”


He’s talking about my journal. My pen. My thoughts. And, “It’s not time yet, is it?” I ask because I’m tripping thready all over light.


It’s time to touch the hem of His garment. Because what I really long for is to be looked for and spoken to while time just passes and I don’t want to worry about deadlines. I want Him to show me that time is not passing away and deadlines are only sleeping. To show me that He’s not worried about deadlines so why should I? To touch hem of Christ and have thready trust hemmed up. 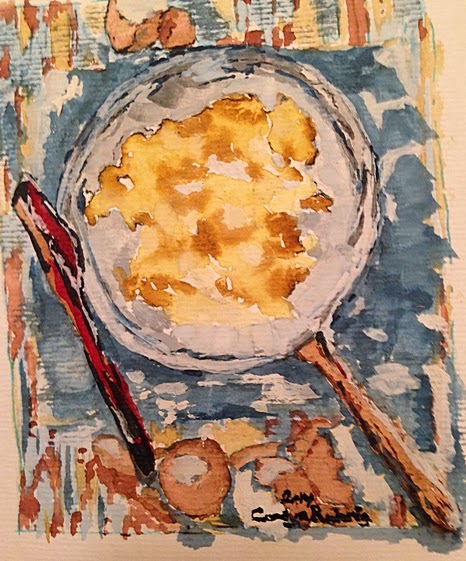 How many mornings ago did I find this branch? How many nights ago did it fall? And every morning I stand here and hear, “Don’t worry about deadlines.” Said by the One who waited til Lazarus was dead four days before going to him. Because He moves deadlines. He wakes them because they merely sleep.


I heard it again this morning. And the branch. It’s dead line literally. And it just lays there. Sleeping? Day in and day out?


And I’m waiting for Him to say, “It’s just sleeping.”


Because He moves deadlines. I know He does.


I just need to see it again. To touch the hem of His garment again while He speaks it because sometimes deadlines are hard when they pass in the night and leave life lines behind. “Be aware of the deadlines, but awake to life lines,” runs ravel through my mind.

“I love you.” I hear Vigilante Voice at my back while I look at this dead wood but see light thready there. And this is it. The thread that hems up trust.


“I loved Martha. And Mary. And Lazarus. So, when I heard he was dying, I stayed away for two more days.” He says the strangest things. But I’m getting it more and more. It’s taken me days and days, but I am starting to get it.


“Are there not twelve hours in a day?” He is speaking John 11 to me. And it’s almost time to move the branch. I know it is because light is threading and I’m not tripping on it just now.


“What is it about love and time and hours and years and being aware of where I am going but being awake to where I am and trust and choice?” It’s all is weave and hem and light that drags through earth dust.


And I don’t understand what it all is. But I touch it. And I drag the limb to the brush pile. And I’m not going to worry about it. The deadline. I choose now. In the drag.